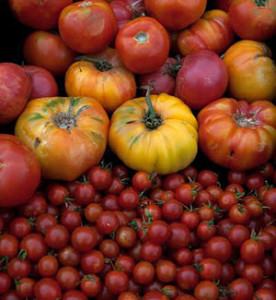 In 1997, Quint and his wife Jenny used their education in Environmental Planning to start a design and engineering firm called TSR Group Inc. In 2003, they were hired to design a new subdivision and convinced the owner to let them incorporate food into the community’s design. This particular subdivision was never built because of the economic downturn, but Quint and Jenny Redmond continued to pursue their passion for suburban agriculture.

“It became an obsession. We have not done anything but food-related design-build-operate since,” says Quint Redmond.

The Redmonds’ firm has a simple yet ambitious mission: to grow 30 million new farmers, one farm at a time. Of course, they don’t plan to do this alone but rather as a part of a larger movement that facilitates local agriculture.

“30 million farmers is a pretty big goal but we are well on our way, and this will make the whole country a better place,” says Redmond.

In order to achieve this goal, the firm focuses on the design-build construction, preparation, and operation of agricultural sites. Some of their tasks include conceptual design, business planning and installation of orchards, vineyards, irrigated specialty crops, and other agricultural related infrastructure. They are particularly interested in working with underutilized suburban and exurban landscapes.

The Redmonds have implemented agriburbia in many different settings including schools, resorts, farms, and private residences. One example of AgriNetx LLC’s implementation of agriburbia is Platte River Village in Milliken, Colorado. AgriNetx was involved in the planning, design, engineering, and project management services of a 640-acre parcel annexed in the Town of Milliken, Weld County Colorado, which included 980 living spaces.

Platte River Village was designed according to the agriburbia philosophy, which means instead of using traditional landscaping, the community uses its open space for the productive and sustainable purpose of growing food. Orchards, vineyards, and annual and perennial crops are incorporated into the community design both for their beauty and for their practical ability to generate food and jobs. Once installed, the agricultural land is owned and actively managed by the Home Owner’s Association (HOA) or is leased to a private entity for management.

When it comes to farming agriburbia, Redmond maintains flexible terms. He does not prescribe a certain type of agricultural technique, but rather encourages those managing the land to consider their particular environment and circumstances and make an informed decision.

“We are not dogmatic about any particular methods, just all natural and the best possible quality for each location and market,” says Redmond.

The greatest challenge Redmond faces in his efforts to implement agriburbia is funding. Many traditional lenders and banks are hesitant to finance agriburbia-style operations, says Redmond. But as agriburbia gains more ground, this issue will gradually become less of a concern.

Moving forward, Redmond hopes to see more and more communities embrace the agriburbia philosophy, which he sees as the future of suburbia.  By adopting an agriburbia approach to design, suburban communities can become more sustainable and will be better able to deal with future challenges as they arise. According to Redmond, these benefits make agriburbia a very necessary step in the evolution of suburban living.

“If you have food, water and shelter close at hand you are very sustainable and resilient. Every community can benefit,” says Redmond.