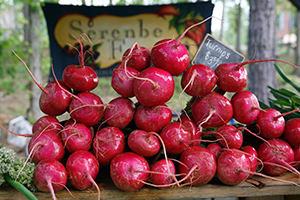 The Nygrens and their three daughters fell in love with the bucolic country setting, which was a welcome escape from their fast-paced life in Atlanta. They restored a 1945 cottage on the property and began staying in the country every weekend.

“We had this big house in the middle of Atlanta with everything that money could buy and all we wanted to do was hang out on the weekends in this 500 square foot, 2 bedroom, 1 bathroom cottage with no technology putting together puzzles and running in the woods,” says Garnie Nygren, Steve and Marie’s eldest daughter.

By 1994, the Nygrens decided to sell their house in Atlanta and move to the country full-time. Soon after, the family started a small bed and breakfast which Marie Nygren named Serenbe, a combination of the words “serene” and “be.”

As they settled into their new country life, the Nygrens came to realize that the encroaching sprawl of Atlanta would eventually threaten the serene lifestyle they valued so much, and they decided to take preventative action. Steve Nygren began buying any adjacent land that became available, eventually accruing 1,000 acres. He also spearheaded an initiative to change zoning laws in his 1,000 acres and the surrounding 40,000 acres of undeveloped greenspace.

“He realized that if we didn’t change zoning in this 40,000 acres that we would become an island in this sea of suburbia,” Garnie Nygren says of her father’s efforts.

During this time, Steve Nygren developed a vision of creating a place where preservation and development could coexist—a place where others could share in the rewarding lifestyle the Nygren family had found for themselves. He began looking for models of sustainable development in the United States but continuously came up dry.

“There were really no models addressing what he wanted,” says Garnie Nygren. “Our big vision is building something similar to the countryside of Europe or England, where you have small towns that are all walkable, that have a sense of authenticity, and a sense of place. We couldn’t really find somebody that was doing that on a larger scale.”

The Nygrens decided to create their own model of sustainable development and established Serenbe, a community founded on the principles of social and environmental stewardship. Eventually, the Nygrens hope to create four distinct communities within Serenbe, each with its own theme. Thus far, two of these communities are already established.

Serenbe’s first community, Selborne, is focused on artistic culture and is home to restaurants, shops, and an art gallery. The Grange, Serenbe’s second community is focused on agriculture and is the locale of Serenbe Organic Farm and Serenbe Stables. Serenbe’s third community, Mado, is currently in the planning stages. This community will focus on health and wellness, and will have a spa, a boutique hotel, a vegetarian restaurant, a juice bar, traditional and holistic medical services, and a progressive assisted living center.

The fourth and final community the Nygrens plan to develop in Serenbe will focus on education and will have a university where students and professors from all over the country can come for a semester-long training program on sustainability.

The Nygrens cultivate sustainability at Serenbe in a multitude of ways. Moving forward, all homes in Serenbe will have geothermal heating and cooling and will be solar ready for homeowners who choose to install solar panels. Serenbe has also banned grass, requiring residents to plant low water-use indigenous species instead.

Another sustainable feature of Serenbe is its wastewater treatment system, which is a gravel, plant, and sand filtration system that treats wastewater so it can be reused. Furthermore, all houses built in Serenbe must comply with the energy efficiency standards set by EarthCraft, the Southeast’s standard for green building.

Garnie Nygren especially emphasizes the importance of walkability and local agriculture in Serenbe’s overall sustainability. Serenbe is designed so residents can walk to restaurants, shops, and other points of interest in all of the communities. Additionally, through its CSA and farmers’ market, Serenbe Organic Farm ensures that residents have a steady supply of organic, local food within walking distance from their homes.

“Creating local-based food systems is just hugely important,” says Nygren. “Everyone at Serenbe can eat vegetables all week long that have never been in a car.”

The Nygrens have been fortunate enough to achieve financial sustainability at Serenbe as well, which means the community has a seemingly bright and stable future ahead of it. Garnie Nygren is clear about the fact that Serenbe is a completely for-profit real estate company (albeit one with a socially transformative mission), and Serenbe’s financial sustainability helps make it a noteworthy model for sustainable development across the country.

“Financial sustainability is as much a part of the conversation and any other type of sustainability. If something is not financially viable, it isn’t sustainable,” says Nygren.