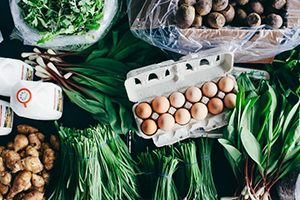 As farmers increasingly seek local markets to sell their product, restaurants are struggling to meet their local sourcing goals without greatly increasing the number of vendors with whom they work.

One Chicago-based business has been addressing this market gap since March of 2013, and plans to expand their business with a new distribution center scheduled to open in fall 2014. The name of the business is “Local Foods,” and CEO Andrew Lutsey hopes the brand will encourage restaurants to increase their local sourcing while providing regional farmers with a focused local market.

After having spent two years on his family’s farm, Lutsey realized that the local market for produce and meats was decentralized and disjunctive. Opportunities for farmers to sell their product locally were hard to find, and this problem seemed especially apparent in the city of Chicago. Thus, Lutsey set off to start Local Foods to address this problem and create new sources of local food for restaurants. Lutsey partnered with Ryan Kimura and Dave Rand, both seasoned food industry experts, and secured funding for a small distribution center in March of 2013. The trio worked to establish a network of restaurant relationships and expanded to $90,000 in sales after their first year in business. The business primarily functions by coordinating the sourcing, delivery, and pick-up of numerous local and regional producers while networking with numerous restaurants and food service companies to understand and feed their demand. Local Foods boasts that it is the first wholesale distributor and retailer of locally grown produce in Chicago.

Local Foods recently announced that they will be expanding to a much larger 27,000 square foot warehouse space for their distribution center, which will also include a retail store frontWherein the past the bulk of Local Foods’ business model focused on the restaurant as their target market, this new store front will adjust the target market to include individual consumers residing in Chicago.

“This will move the business from B to B towards B to C,” Lutsey explains. The new distribution center is financed entirely by private investors, and the company forecasts that all investments will be recouped by mid-2015.

Local Foods sources the majority of their produce from within a 300-mile radius of the Chicago center, and seeks sources that use organic or natural growing techniques. Local Foods believes firmly in honesty and transparency, and carries location information and growing techniques for all food items carried. Lutsey hopes that this initiative will find better markets for farmers while also creating efficiencies for restaurants to increase their local sourcing.

By creating links between producers and consumers, Lutsey hopes that Local Foods will ultimately help to drive local food production and consumption in Chicago and the midwest region at large. This initiative holds the potential to assist sustainable local agriculturalists, while meeting the demand for local produce across the region.

Moving forward, Lutsey hopes that Local Foods can become a local and regional food hub that could potentially influence change across the supply chain.