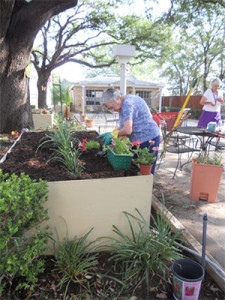 San Antonio has lots of poverty and cheap land.

Now, through urban gardening and sustainability, the San Antonio Housing Authority is starting to use all that extra space help the population.

SAHA has found a great deal of success enhancing community development through local food. Their efforts are led by Beth Keel, Sustainability Initiatives Liason, who works on everything from energy efficiency to stormwater catchment.

To Keel, sustainability is a key part of any vision for affordable housing.

“Short-term cost savings are a big motivator, but it’s also longevity. These buildings are intended to last many more decades than most building designs and keep providing public benefit,” she says.

“One of the ways that people gauge poverty and income equality is in how much access there is to healthy food. It’s easy to see, areas without good grocery stores are almost always low-income. The idea of urban farms came along to supplement food security and make it to that so residents wouldn’t have to go so far to get inferior food at McDonald’s or a gas station,” she says.

In San Antonio, with a diabetes rates of nearly 10 percent and obesity rates above 30 percent, gardens can fill stomachs with nutritious food, and with median income in many areas at $17,500, they can do that at an affordable price.

The San Antonio Housing Authority now has 11 community gardens operating at housing complexes around the city, especially facilities with a large elderly population.

“That’s a population that is on fixed income, and a lot of their revenue goes towards medicines, so the extra food can make a big difference.” says Keel. “Many of them have limited mobility, and a community garden provides them a rare opportunity to do work and experience the benefits from that effort.”

Projects like the community gardens earned the San Antonio Housing Authority a designation as a “sustainable agency” by the U.S. Department of Housing and Urban Development, one of only 17 in the country with such an accolade. With tangible successes and national accolades, SAHA decided to make community gardens a critical component of their new flagship development project.

In 2011 and 2012, SAHA was awarded three grants through the White House’s Neighborhood Revitalization Initiative, in total amounting to over $50 million. With the funds, SAHA targeted San Antonio’s Eastside, where 44 percent of the population hasn’t received a high school education and violent crime is three times more prevalent than the rest of the city.

The Eastside doesn’t have a single place to buy organic produce, but it does have empty or abandoned lots comprising more than a quarter of the properties there; three and a half square miles with space for 8 million tomatoes, 10 million jalapenos, or 30 million cilantro plants.

SAHA’s is focused on a 13-acre area in the northeast corner of the Eastside, squeezed in between railroads, derelict warehouses, and an expensive downtown. Construction has just finished on their largest development yet, called the Sutton Oaks Community.

The complex features energy-efficient buildings with three quarters of the apartments are available as subsidized housing. The Sutton Oaks garden is by far the largest SAHA has built. When completed, the garden will have 17 4 x 8-foot raised beds, 6 fruit trees, more than 10 berry plants, and a huge bed of herbs.  Unlike SAHA’s previous gardens, the Sutton Oaks garden is intended to be used as a teaching tool for children.

“A lot of these kids have never experienced gardening, they have no idea where vegetable gardens come from, so this garden will be a way that they can reconnect,” says Keel.

It will be a fully interactive garden, with native plant installations to summon bees and beneficial insects.

“This is key because they need to learn about agriculture’s different facets, learning about pollinators rather than just soil,” says Keel.

“A trip to the closest supermarket by bus takes three hours, even though it’s just two miles away,” says Victor Zuniga, director of activities at Sutton Oaks. “A quick trip outside to the garden may change the minds of some residents about where we should get our food.”

The most distinctive part of the garden is the small amphitheater under an ancient live oak tree. Kids will use it for plays and speakers will come in to give cooking demonstrations and nutrition lessons. Picnic tables scattered amongst the garden will bring residents out to interact and enjoy the sunshine and the crops.

The grand opening of the Sutton Oaks complex is May 31st,2014.

Zuniga says, “This garden is a revolution. It’s change. It’s something they’ve asked or, but didn’t know what to expect. People in the Eastside just don’t yet know what local food production looks like—yet. I can’t wait for us to start growing.”