Growing Food and Farmers in Manhattan 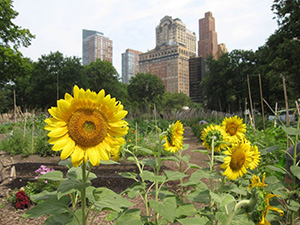 Sponsored by the Battery Conservancy, the farm is a piece of green in a concrete jungle. Image courtesy of Battery Urban Farm.

The Battery Urban Farm is a magnet for New York residents and visitors alike, building awareness of urban agriculture in a place restricted by real estate costs and land availability. Working with dozens of local partners, Battery Urban Farm is a chance for the nation’s most popular metropolis to reconnect with nature, grow food and comprehend the growing culture of the local food movement.

Located on the very tip of Manhattan, Battery Urban Farm is a turkey shaped, one-acre public farm in a park that receives in excess of six million visitors every year. The farm began in 2010 when a few local students were looking for a place to grow vegetables. The Battery Conservancy contacted every local school and together the students, volunteers and Conservancy members turned an acre of land in New York’s financial district into a fully functioning urban farm. A sustainable, food producing ecosystem, the farm’s focus is education with programming for every age group.

“To able to work in such a visible and highly populated area of New York, to do this kind of work and have so many people see it is really great,” says Camilla Hammer. Project Manager at Battery Urban since 2011, Hammer is a self-confessed food philosopher and sees the farm’s work as more than just a place for tourists to take farm tours. “There’s quite a profound, intangible benefit to being in a green space when you live in a city,” says Hammer. “Humans have an intrinsic interest in nature and if you’re in an urban setting oftentimes you’re missing that. Just spending an hour working outside can really change your day.”

The Battery Conservancy, the nonprofit behind the farm, was created in 1994 with the mission of revitalizing the 25 acres of parkland in New York’s Battery district. Without their support and connections, the farm would not exist.  According to Hammer, being a nonprofit located on public land plays a large role in the farm’s choice of programming. “It allows us to open up to many different organizations and many different people because we don’t charge for any of our programs. We never have to turn anyone away,” says Hammer.

For children and youth, Battery Urban Farm has several programs that encourage an appreciation of nature while providing real life skills. The Student Farmer’s program is a 19-week curriculum-based program for local schools that works with state education benchmarks while teaching life cycles, life science and the basics of gardening and growing.

“Youth have a better understanding of the fact that there is nature around them and that they are interacting with nature even though they may not realize it,” says Hammer.  Farm plots are available to area schools providing hands-on experience for future urban farmers. The City Seedling program is for the under-5s and their parents, allowing them to spend time on the farm while listening to stories. Farm tours are also available.

For adults, Battery Urban Farm offers a teacher training program as well as an apprenticeship program. The apprentice program is an intensive farming education program that comes with a stipend, with  goal of helping apprentices develop job skills. According to Hammer, almost all of the apprenticeship graduates have gone on to work in urban agriculture and some have even started their own farms.

Battery Urban Farm hosts two annual events where they sell the harvest using the “suggested donation” system. Throughout their open season, April through November, the food is donated back to local students, their schools and food banks. In 2013, the Battery Urban Farm worked with 50 schools and 2,700 students.  From an eight student request in 2010 to almost 3,000 students in 2013, Battery Urban Farm is growing farmers thick and fast in the city that never sleeps.