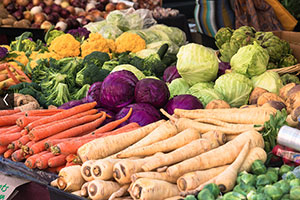 Heart of the city farmers’ market.
Photo by Sergio Ruiz

It’s no surprise that San Francisco has a strong urban farming community—and it’s one borne of the efforts of local government working closely with community groups.

The city is also home to multiple urban agriculture organizations, which include advocacy groups, nonprofits and community gardens.

“Lots of city agencies support urban agriculture in one way or another, whether with land, financial support, or other resources,” Zigas says. “The most prominent are the Recreation and Parks Department, Public Utilities Commission, Department of Public Works, and Department of the Environment.”

Another city resource is Friends of Urban Forest, which encourages urban agriculture in the city. Marcia Lieberman, gardener and affiliate of San Francisco Zen Center, says that FUF was founded after the city and county of San Francisco cut funding to urban forestry in the late 1970s. The founders used leftover funding from city grant money to organize neighborhoods to plant and care for their own trees.

“Friends of the Urban Forest has planted more than 48,000 trees in more than 1,100 neighborhood tree-plantings, has a strong partnership with the city and county of San Francisco, and is well loved among San Franciscans,” says Lieberman.

On April 20, 2011, Mayor Ed Lee signed a new urban agriculture zoning ordinance into law on April 20. According to the San Francisco Urban Agriculture Alliance, this legislation puts San Francisco at the forefront of cities that are updating zoning codes to encourage urban agriculture. Following the Planning Commission hearing, Mayor Lee and Supervisor David Chiu, the sponsors of the proposal, added  amendments concerning value-added goods, fencing requirements, and water use.

In July 2013, the San Francisco Board of Supervisors allowed the Recreation and Parks Department to head and coordinate the city’s support of urban agriculture with the launch of the city’s first Urban Agriculture Program. The program will advocate urban agriculture and coordinate all related agricultural activities citywide. The program will also manage and support San Francisco’s community gardens, as well as expand its coordination to other similar projects on public properties, help establish urban agriculture resource centers, streamline application and wait list processes for community gardens, and develop new urban farming projects.

According to Zigas, the legislation allows city governments (with approval from county board of supervisors) to designate areas within their boundaries as urban agriculture incentive zones. Landowners who commit their land to agricultural use for at least five years get a reduction in property taxes. The owners’ parcel’s property tax assessment will be based on the agricultural value of the land—not the market-rate value of the land.

Zigas says that overall, urban agriculture’s economic and social returns are hard to measure and, as far as he knows, no one has measured those kinds of metrics in the city so far.