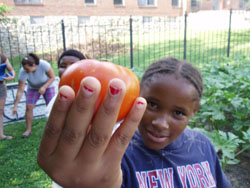 “Farm” is no longer a four-letter word in Kansas City—and it hasn’t been since 2010 when the city passed a zoning ordinance allowing citizens to grow food in residential areas. Prior to the ordinance, it was illegal to grow food for profit in areas zoned residential. This made operations difficult for urban farmers, especially those whose business models revolved around growing food within the communities they sold to.

“All the people involved in urban agriculture saw the need to modify the rules so that we could increase production in neighborhoods, so people could walk down the street and get tomatoes for dinner,” says Mann. “It’s a pretty simple thing to put food production right where people live.”

The new ordinance divided urban agriculture into four categories: home gardens, community gardens, crop agriculture, and CSA farms. The definitions of these categories are relatively self-explanatory. A home garden is classified as a garden located on-site where the individual maintaining it lives. A community garden is maintained by a group of individuals gardening for personal consumption, sale, or donation. Crop agriculture is growing and harvesting food for sale at an off-site location (or on-site with special permits). And a CSA is growing and harvesting food for shareholder consumption.

BoysGrow is another noteworthy urban agriculture nonprofit, says Mann. The organization teaches young men from urban areas about farming and entrepreneurship and is especially well-known in the Kansas City area for the value-added products it sells. Through its youth work program, BoysGrow trains young men in the growth, harvest, and sale of crops both in their original form and in value-added products like salsa, BBQ sauce, and ketchup.

With the mission of establishing sustainable communities in the most difficult and overlooked places on earth, the Urban Farming Guys are another nonprofit changing the landscape of Kansas City for the better. The organization, which is comprised of a group of self-proclaimed “urban pioneers,” has moved into one of the most dangerous neighborhoods in Kansas City (and the country), the Lykins Neighborhood. Amazingly enough, since they began their urban agriculture experiment in this neighborhood, crime rates have dropped over 20%.

According to Mann, safer communities are a natural benefit of practicing community agriculture in urban areas. “People are outside, they’re seeing what’s going on. Criminals don’t like that. They don’t like people around when they do their stuff. So it’s helping a lot in that regard,” says Mann.

The growth of urban agriculture in Kansas City is also benefitting the community by putting empty lots to good use. Mann says Kansas City currently has over 3,000 empty lots and the city spends close to $300 a year on each lot to mow and maintain it. Understandably, the city is actively looking for ways to utilize these lots that save money and contribute positively to the community. Using the lots for urban agriculture is an obvious solution. The city has even received funding from the EPA to test urban lots for contaminants that would make them unsuitable for farming.

Mann believes urban agriculture will become an increasingly important component of Kansas City’s economy in coming years, although there are still a few barriers to transcend. The main barrier relates to people’s perception about the price of food. Years of agricultural subsidies, says Mann, have left some consumers with a distorted idea of what food should cost. More and more consumers, however, are aware of the benefits of local food, and this gives urban farmers like Mann hope.

“I think in the future it’s going to be more and more economically viable to be an urban farmer. There’s a huge movement to “buy local” that we’re seeing, and it’s only getting bigger. As people realize and see what’s going on, they embrace that “buy local” philosophy. So they will support farmers and they’ll even pay a little more even though they could go to a grocery chain and buy it cheaper. It’s about values—this is all about people’s values.”