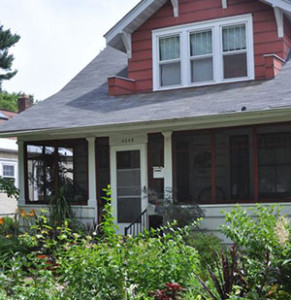 With a penchant for all things rotting, Russ Henry has built a sustainable business, literally from the ground up.

Giving Tree Gardens is an organic landscaping service in Minneapolis well known for its high quality compost. Specializing in native species planting, pollinator-friendly designs and organic gardening education, Giving Tree Gardens has been building a sustainable business and a positive influence in the Twin Cities since 2005.

Russ Henry, owner of Giving Tree Gardens, spent many years in the landscaping world before starting his own company.

“As way of confession I should say I was at one time a Miracle-Gro gardener,” says Henry. He watched his employers, even those trying to be more sustainable, use chemical treatments on weeds and lawns. So Henry began experimenting with compost. “I was completely blown away by the growth rates that were achieved using compost. That completely changed my trajectory and my career,” he says. “I started doing some research and I realized that the chemical fertilizers were killing off the vital microbial life in the soil. So I switched off and started using compost.”

After working for several different landscaping companies, Russ decided the only way he could control chemical use was by opening his own business. So Giving Tree Gardens was born with one full-time employee. Seasonal crews assist Henry as he moves from gardening and landscaping in the growing season to snow removal during the winter. Over the years, Giving Tree Gardens has created a large group of customers including residential projects, small business landscape design and non-profit community programming.

Reducing waste is essential to Henry, and that includes water waste.

“Here in Minnesota, we have not only those beautiful lakes but creeks and rivers all around us,” he says. “It’s really important that we’re not rushing the warm water that lands on our property into the waterways because it does damage. Instead we try to keep as much water on site as possible.”

As well as encouraging the use of rain barrels for watering, Henry creates “rain gardens” for his clients, utilizing low spots and native planting to absorb surface runoff. He also creates foraging lawns to attract bees and other pollinators.

Forming alliances with local coffee shops and breweries, Henry began gathering food waste, coffee grinds and brewing waste on a commercial scale to ensure his customers had access to a quality compost. It wasn’t long before his mastery of the compost outgrew his residential lot and he began to test the limits of the city’s commercial composting ordinances.

Working with city council members and his associates at MPCA, Henry was successful in increasing the size of allowable piles for residential compost, and the eliminating city’s requirement for pile walls that create hardships for seniors and the disabled. Currently the state of Minnesota is rewriting its regulations on commercial composting and Henry hopes the Twin Cities will follow suit in the near future. Henry has testified before the state on the needs of commercial composters.

Henry advises anyone considering a sustainable business to take into account the importance of influence. Volunteering in the community, being aware of sustainability legislation and holding positions on local agencies that stand up for sustainable practices is not only a way to brand a business, but builds a network of like-minded folks that a small business owner can turn to for when needed.

“I moved all the way from being a chemical gardener to the gardener that runs his business on making sure there are no chemicals at all,” says Henry. “We’ve done everything on the power of compost.”