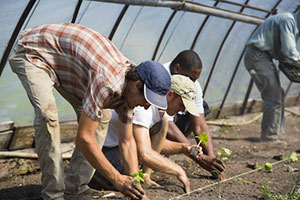 As a nation enamored with the marvels of capitalism, it is little wonder that worker-owned cooperatives (businesses owned and controlled by their workers) have not managed to capture much attention in the United States. There are, in fact, 300 worker cooperatives in the United States, but most of them remain relatively unknown or misunderstood by the general public.

Our Harvest Cooperative is a union worker-owned cooperative started in 2012 by the Cincinnati Union Coop Initiative. The Cincinnati Union Coop Initiative, which emerged in 2009, is a collaboration between Spain’s Mondragon Worker-Owned Cooperatives and the United Steelworkers—two organizations that came together with the goal of duplicating the success of Mondragon in the United States. Mondragon, founded in 1956, is now the seventh-largest corporation in Spain and remains a model for successful worker-owned cooperatives throughout the world.

The Cincinnati Union Coop Initiative established Our Harvest with the primary intention of developing a food hub, but their focus soon expanded to include farming and farmer training as well.  According to Our Harvest’s Food Hub Manager Kristin Gangwer, the organization’s primary goals are to produce sustainably-grown local produce, build a food hub to strengthen the local food system, increase access to healthy food, create family-sustaining jobs in Greater Cincinnati, and to sustain these efforts by training new farmers.

Presently, Our Harvest operates a more than 200-member CSA program for which it grows over 40 different types of vegetables. The coop has chosen vegetables that do well in a variety of seasons and has tried to provide their CSA members with a wide selection.

“Crops range from lettuces, greens, and root vegetables in the spring, to tomatoes, peppers, and all the classics in the summer, to broccoli and winter squash in the fall,” says Gangwer.

Our Harvest also runs a two-year farmer training program which they offer in conjunction with Ohio State University Extension. Through this program, aspiring farmers are offered apprenticeships at Our Harvest for two growing seasons in order to attain hands-on farming experience.  Additionally, Our Harvest provides another outlet for sustainable agriculture education by acting as a practicum site for Cincinnati State Technical and Community College’s Sustainable Agriculture Management certificate program.

According to Gangwer, Our Harvest’s revenue comes mainly from selling produce and grass-fed beef. In addition to its CSA, the coop sells its products to grocery stores, restaurants, academic institutions, and farmers’ markets. The food hub is also an emerging source of revenue for the operation—one they plan to rely on more in the future.

“As we continue to develop the food hub, we’ll also generate revenue from the sales of other producers’ fruits, vegetables, and value-added products,” says Gangwer.

Since its founding in 2012, Our Harvest has been growing food and training farmers on seven acres of land located within the city of Cincinnati. This year, however, they have decided to expand their efforts by leasing 20 acres outside of the city.

“Operating in the city has been very important for us, as it allows easy access to consumers and other markets, and it also allows easy access for students, educational partners, and staff,” says Gangwer. “The main limitation has been space, so this year we’ve also leased land outside the city to supplement our urban growing.”

Although Our Harvest is resolving the issue of limited space, they face other common agricultural challenges like unpredictable weather, labor costs, and high product prices. Despite these and other barriers, the organization remains dedicated to achieving their long-term goals. Moving forward, they hope to continue creating family-sustaining jobs, developing a food hub, supporting other local growers, developing markets for local food in Cincinnati, producing local, sustainable produce, and training new farmers.

According to Gangwer, Our Harvest recognizes that they are making important contributions that go beyond just growing food.

“While urban agriculture can be important for food production, it also offers many social benefits– like community building, education, connection with nature, skills training, and health awareness,” she says.

INFOGRAPHIC: 5 Reasons the Future of Agriculture is Indoors