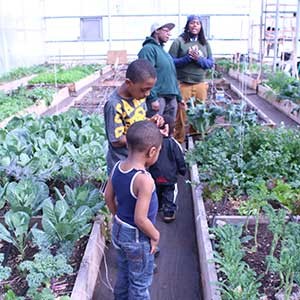 It is said it takes a village to raise a child. And what does it take to raise a commercial crop of leafy greens on a vacant lot in Boston? A different kind of village—one that includes experts practiced in the art of land tenure.

By bringing together such experts,  the Trust for Public Land is helping to facilitate urban agriculture in the City of Boston. Back in 1972, the organization’s founder, Huey Johnson, recognized that negotiating land deals calls for expertise in law, real estate and finance.  The trick to open space preservation, as he saw it, was to employ the strategies of modern business.  Forty some odd years later, TPL has seen through over 5,300 parks and conservation projects in the majority of the nation’s states as well as Puerto Rico and the U.S. Virgin Islands.

“TPL has a long history of land deals across the country with city parks, our working landscape projects and traditional farmland conservation work,” says TPL Senior Project Manager Chris LaPoint. “We’ve also been doing a lot in cities to make our cities more livable and there’s an intersection there with urban agriculture. The TPL is aware there’s an urban agriculture movement underway and we’ve observed a need to pay more attention to land tenure. The TPL has the skill set around real estate and a core competency that’s needed.”

Land tenure, or an arrangement to rent or lease land, represents a realistic solution to the security issue most would-be urban farmers face.  To address this need, TPL seeks to find ways to acquire land, attend to infrastructure requirements and ultimately turn the holdings over to urban agriculturists to farm.

TPL helped facilitate the passage of Article 89, Boston’s urban agriculture zoning ordinance. With the way for urban agriculture cleared, TPL is getting down to the business of developing farms by partnering with local organizations intent on the same goal.

For its first project, TPL identified two local organizations with strong assets to bring to the table.  One is the Dudley Neighborhood Inc. a community land trust based in Boston’s Roxbury neighborhood, and the other is the Urban Farming Institute, a Boston-based organization founded in 2012 for the purpose of supporting the development of income producing urban farming.

The collaboration is about putting together a vehicle with multiple partners who bring their unique expertise to the table, says Lapoint. TPL is equipped to address legal real estate issues and to design and develop site infrastructure. “But (we are) not set up to own land,” says Lapoint.

Fortunately, Dudley Neighborhood Inc. raised their hand and said, ‘We can do that.’

An opportunity provided by the city served as the impetus for the collaboration.  Looking to continue actions to promote urban agriculture once Article 89 was enacted and a preliminary trial proved successful, Boston’s Department of Neighborhood Development identified three land parcels suitable for farming and invited interested parties to submit bids for their development.  A request for proposals was made public in December and the final deadline was set for the start of February.

“The Public Facilities Commission selected us as the ‘tentative designees’,” said Lapoint. “We’re in line to be the winner.”

Optimistic about their chances of having their bid selected, TPL began several months ago to raise funds for the project.

“TPL’s bid is to acquire the lot and provide all upfront investment to ready it for farming,” says TPL director Kevin Essington. “After that we will turn it over to Dudley Neighborhood Inc., who will enter into a lease with the Urban Farming Institute.”

In negotiating land deals for urban agriculture TPL is venturing into new terrain.

“We’ve never done this urban farming enterprise before,” says Essington. “We have lots of gardens all across the country, but this is a bit different.”

“(Historically) deals were a handshake agreement, or a short term lease,” says Lapoint, adding that as such they were insecure. “Insecurity is an impediment to farming.  Without security there isn’t the providence to invest in infrastructure, soil augmentation or remediation etc.”

With this in mind, in addition to working on projects involving city owned land, TPL is talking with private landowners to arrange deals for long-term leases.

“We have the right partnerships at the right time with the right leadership.”

INFOGRAPHIC: 5 Reasons the Future of Agriculture is Indoors