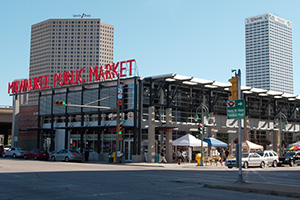 The City of Milwaukee is rife with urban farming organizations, like the venerable Growing Power, non-profit groups like Walnut Way and for-profit organizations like Sweet Water Organics and Central Greens. All of these groups have have helped shape Milwaukee into a national leader in the local food and urban agriculture movement.

According to an Urban Agriculture Code Audit  recently conducted for Milwaukee by the United States Environmental Protection Agency, Milwaukee’s urban agriculture scene has grown to a point where there is now an immediate need for expanded processing centers.

The audit also found that while the city’s Building and Zoning Code provides a good foundation for facilitating urban agriculture, the code should be updated to allow for beekeeping aquaculture, and chicken keeping, and should be further developed to create standards for and accessory structures and uses like food processing and composting.

“In residential districts, we are working towards urban agriculture to always be a net positive for the neighborhood – creating a new green space for local food production and a gathering space for local residents, while focusing on reducing the noise & nuisance and optimizing aesthetics,” says Tim McCollow, manager of Milwaukee’s Home GR/OWN program. The program works to connect would-be city farmers with vacant, foreclosed land, streamlining permitting processes and cultivating a local food system. “We have been always trying to update our codes regarding urban agriculture.”

According to McCollow, Milwaukee has approximately 177 community gardens on city land and has given grants to sustainable farming operations, such as Growing Power.

Tom Barrett, the city’s current mayor, launched the Home GR/OWN initiative. The initiative hopes to change how the government deals with city real estate and aims to turn structural liabilities into positive assets for the community through building a local food system.

“It was (Mayor Barrett’s) idea to focus on the linkage between foreclosed homes, vacant lots and increased access to healthy food in our central city,” McCollow says. “Home GR/OWN was our entry into the 2012 Bloomberg Mayors Challenge.”

Currently, the city has approximately 3,000 vacant lots and 1,300 foreclosed homes in its poorest neighborhoods.

The city also wants to connect community buyers with local sellers to make the food economy in Milwaukee easier to use. McCollow says that cities can make urban agriculture more accessible by eliminating the silos that exist in city government.

McCollow also suggests that cities examine what their policies are for selling vacant lots and how they handle new issues, such as accessory structures.

“It’s at the code and policy level where every city needs to review current policy under a new paradigm,” he says. “We are in a different economic system than ten years ago.”

McCollow notes that Milwaukee is home to a number of notable leaders in the urban agriculture scene in the city.

One of these is the Sweet Water Foundation, which works with educational institutions, community groups, and affiliated organizations to develop academic and community enrichment programming focused on aquaponics production. The foundation focuses on the potential of urban agriculture as a vehicle for community development.

“It took quite a collective effort,” Blom says. “Milwaukee has become a model for other cities.”