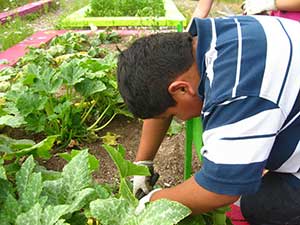 Where does your food come from?

For years, residents of Denver, Colorado may have scratched their heads over that question, because most of the city’s food supply was sourced from elsewhere. Recently, however, stakeholders in the private and public sectors collaborated to help food growers prosper within the Denver metropolitan area.

Some stakeholders have their hands in the dirt, teaching urban agriculture methods and building community gardens. Others are working behind the scenes to change the laws governing land use in Denver. All are working toward a goal set by Mayor Michael Hancock in 2013 to acquire at least 25 percent of the city’s food from “sources produced (grown and processed) entirely within Colorado,” according to the Mayor’s 2020 Sustainability Goals.

One stakeholder, the Denver Sustainable Food Policy Council www.denversfpc.com, is a public-private coalition established in 2010 with a mission to increase food security and promote a sustainable and healthy food system, while also keeping economic and environmental interests in mind.

Shannon Spurlock sits on the Denver SFPC; she is also Community Initiatives Coordinator for Denver Urban Gardens. According to Spurlock, DUG’s purpose for the past thirty years has been to build community, one urban garden at a time. Now her organization partners alongside other groups with similar missions.

“Over the years, our organization’s role has changed,” she says. “I think organizations like ours are recognizing that they are part of a web of people contributing to a local sustainable food system.”

Another member of the Denver SFPC is Eric Kornacki, Executive Director and Co-Founder of Revision International, which works to create food security in some of Denver’s low-income neighborhoods. He sees promise in a proposed ordinance the Denver SFPC is sponsoring this year with Denver Councilwoman Robin Kniech, which would allow the sales of fruits, vegetables, and “cottage foods” (food products made from fresh produce grown in home gardens, such as jams or honey) as home businesses within the city.

The State of Colorado already allows residents to sell cottage foods on their premises; this new ordinance would bring the city of Denver in-line with a state law already on the books. Denver’s zoning laws were previously updated in 2011, when the Denver City Council passed an ordinance allowing citizens to raise chickens and goats on their properties.

“The cottage foods law would allow residents to sell produce from their gardens,” says Kornacki. “This would make it an accepted home occupation, with the potential to allow more food to be sold in low income areas, and would give residents the option to earn extra money to sell produce to their neighbors.”

Currently fresh produce can be sold on school or church sites, at a farmers’ market or restaurant, or directly to consumers only if the produce is grown in a garden in a nonresidential zone.

Both Spurlock and Kornacki see room for improvement in other policy areas.

“Denver has created a supportive environment, with urban gardens allowed in all zoning districts,” says Spurlock. She points out that there are still obstacles, especially for people who are food insecure. “There are still barriers. Many SNAP recipients don’t know they can redeem their benefits at farmers’ markets. State agencies can authorize farmers’ markets to accept WIC vouchers, but WIC vouchers are limited for use only at farm stands run by the farmers themselves.”

“I would like to see public policy specifically to create land banks or land trusts,” he says. “Perhaps we could treat urban farms in the same way we treat public parks, setting aside a certain amount of acreage per person. Right now, people are trying to farm on very expensive property with no zoning protection or tax benefits.”

He also sees a need for more collaboration between producers.

“At this time we have many small scale farmers,” says Kornacki. “At some point, in order for urban agriculture to grow, we need to figure out how to maximize economies of scale.”

Kornacki sees a bright future for urban agriculture in Denver, even with some growing pains along the way.

“Denver is a young, active, progressive city,” says Kornacki. “Sustainability is on the forefront. People are looking for ways to buy locally and seasonally.”

Getting to Higher Ground with Rooftop Farming