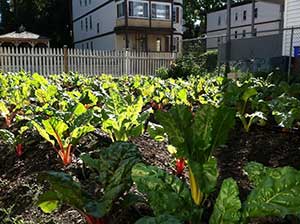 In the early 1990s, ReVision Family Home, a shelter for pregnant and parenting women in Boston, Massachusetts, began a community garden with the intention of providing fresh, nutritious food to the families at the shelter.

As it expanded, the community garden grew into ReVision Urban Farm, a half-acre urban farm that provides fresh, nutritious food not only to shelter residents, but to the entire Boston community.

In 2005, ReVision Family Home and ReVision Urban Farm merged with Victory Programs, a nonprofit agency dedicated to serving those who are homeless, have substance abuse issues, and/or other related illnesses and disorders. As a result, both the farm and the family home became programs among a diverse network of social services.

Today, the farm grows a wide-range of vegetables, including eggplants, tomatoes, bell peppers, hot peppers, radishes, turnips, scallions, lettuce mix, and kale. According to Farm Manager Shani Fletcher, ReVision grows these particular crops for a variety of reasons. First, they select crops that grow well in a small-scale farming environment, as they only operate on about a half-acre of land. They also choose items that will provide a steady harvest throughout the season, rather than crops that are only harvested at the beginning or end of the season.

ReVision Urban Farm’s official mission is to increase access to local affordable nutrition and culturally appropriate food for shelter residents and the extended community. To accomplish this mission, the farm gauges customer demand to guide crop selection. Fletcher performs a yearly assessment of what grew really well and what sold really well in the last season and uses this assessment to select crops for the current season.  The farm also looks at the cultural make-up of their clientele and tries to provide produce that is not available at other grocery stores or farmers’ markets. For example, over the past two seasons they have started growing certain Vietnamese specialty crops because one of the farmers’ markets they attend is predominantly visited by Vietnamese customers.

ReVision Urban Farm runs a CSA, a farm stand, a seedling sale, a youth program, a job training program, and participates in numerous local farmers’ markets. Fletcher says that the multifaceted nature of the farm’s operations can be demanding at times.

“We have a really complex program, and so keeping all the wheels turning and all the balls in the air can be challenging,” Fletcher says. “Trying to take care of the plants and meet our program needs at the same time is important to us.”

The farm, which is both grant-subsidized and funded through sales, also confronts a very common problem in the nonprofit and farming worlds: maintaining long-term fiscal sustainability. According to Fletcher, ReVision is always working to increase its fiscal sustainability. At this point, their greatest income generators are their seedling sale and CSA. They are also extremely grateful for grant support that enables them to sell their produce at an affordable price.

Currently, ReVision operates on a half-acre of farm land converted from vacant lots, but their long-term goal is continued expansion. One recent avenue of expansion has been Boston’s urban agriculture rezoning initiative, Article 89. As one of two pilot sites for the initiative, they recently began farming another vacant lot about three-quarters of a mile east of their current location. They hope that this and other opportunities for growth will help them have an increasingly positive impact on the health of shelter residents and the greater Boston community.

As ReVision Urban Farm’s Manager, Fletcher believes very strongly in work they do at the farm and its potential to transform Boston and beyond. By making fresh, healthy food available and affordable to people in low-income, urban environments, Fletcher believes they are not only doing something good for the community, but are also making a larger political statement.

“I think it’s a revolutionary act to take back the food system,” Fletcher says. “It’s really a very powerful way for people to impact their own health and their own community.”