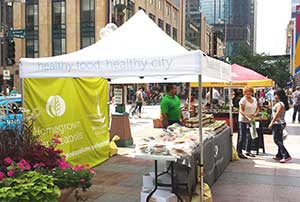 Homegrown Minneapolis has developed a brand that was used at the Nicollet Mall Farmers market to advertise locally produced and processed products. Image credit: Jane Shey

“Community gardens make people work side by side,” says Jane Shey, coordinator of Homegrown Minneapolis, a city-led urban agriculture initiative that launched in 2009.

“It’s a community building exercise and I don’t think we can underestimate the value of that.”

Part of Shey’s work for the City of Minneapolis is helping emerging urban agricultural businesses tackle the zoning, ordinances and permit requirements necessary for doing business. When there isn’t legislation to allow for a certain kind of sustainable business, she works with the city, the Minneapolis Food Council and other community stakeholders to create it.

“What’s really nice about local food is it’s a great entry point for people in the community that do not have a lot of assets,” says Shey. “Most of our local food owners and growers don’t have a lot of collateral, they probably can’t go to a bank but obviously the community supports the local food. Starting a food truck or setting up a CSA is easier to do than other forms of business.”

A number of sustainability programs, ordinances and codes have passed in recent years including an Urban Agriculture Policy Plan, changes to zoning laws to allow for sustainable urban development, creation of a local food hub network and the adoption of a Climate Action Plan to reduce emissions in the city. The city uses a system of indicators to track the progress of their community as a whole. In recent years, a number of sustainability goals were added to the comprehensive list that makes up the city’s “Greenprint.”

Like most American cities, Minneapolis’ sustainable local economy is still in its infancy.  But it’s about more than just creating jobs, according to Russ Henry, local sustainable business owner and founding member of the Minneapolis Food Council.

“There are many styles of localized food production that are being planned in the Twin Cities area that are a net benefit towards the goals for reducing greenhouse gases,” says Henry. “It’s primarily a threefold argument for urban farming: economic stimulus, public health and the environmental benefits. When healthy food is produced closer to home then people are connected more and so they understand a lot more about how to produce health for themselves.”

Omari Chatmen is the newest co-chair of the Minneapolis Food Policy Council. As a volunteer with the community garden project, Chatmen is excited to empower urban communities in learning how to grow food and build job skills.

“It’s creating more market for our local growers,” says Chatmen, who specializes in working with young people on growing skills. “A lot of them are very interested in going to the market themselves and selling.”

Right now Chatmen is one of the voices advocating for hoop houses throughout the city. Indoor agriculture and hoop houses would extend the local growing season and give young folks practical experience year-round.

“Once they get involved they don’t want to stop,” says Chatmen. “Once winter came it was cut off to them, so I would definitely want to see that opportunity to grow year round locally.”

As Shey points out, hoop houses would increase local resilience to weather conditions that determine the price of fresh food for any city.

“I think cities are better if they can build community and growing stuff is a really good way to do that,” says Shey. “If people can grow their own food they begin to think differently about what they eat.”