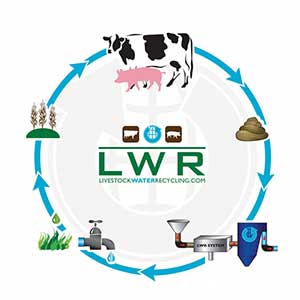 In the early years of the twenty-first century, the environmental activism of former Vice President Al Gore inspired many people to action. Among them was president and co-founder of Calgary-based Livestock Water Recycling, Ross Thurston. In 2003, Thurston was so inspired by the former vice president’s work concerning the global water crisis that he decided to pursue a potential solution to this problem—global water treatment.

“An average dairy farm with 2,500 cows generates 35 million gallons of manure liquids each year,” Thurston says. “This is as much waste as a city with 411,000 residents – which is equivalent to Miami, Florida or Oakland, California.”

Thurston already had the background and expertise to tackle this issue; for 15 years prior he managed a successful business treating contaminated groundwater across North America. The transition to wastewater treatment in the livestock industry was a natural, albeit ambitious, next step.

Thurston began examining the problem more closely and made a few important realizations. First, he discovered that manure liquids are composed of 95 percent water. Second, he realized that it was possible to extract both the water and the highly-valuable fertilizer nutrients from the millions of gallons of manure produced by North American farms each day.

To capitalize on these discoveries and to fill an obvious need, Thurston developed the Livestock Water Recycling Manure Treatment System. According to Thurston, the system treats manure using a mechanical and chemical process that separates water from nutrients.

“As manure flows through the system, solids and fine particles are sequentially removed,” Thurston explains. “The nutrients are segregated and concentrated to be used as fertilizer. The recovered water emerges clean and drinkable. The nutrient outputs are used to fertilize crop land or sold to create an additional revenue stream. The clean water is used for irrigation or cleaning purposes.”

Although Thurston originally created the LWR Manure Treatment System with the livestock industry in mind, it can be utilized at any hog, dairy, or anaerobic digester operation. And the system has many potential benefits for the farms that use it: it provides a stable source of clean water during times of drought, it minimizes the potential for nutrient overloading and groundwater contamination, and it reduces the unpleasant odor that comes with storing large pools of manure for extended periods of time.

Livestock Water Recycling is targeting large-scale farms for its Manure Treatment System. According to Thurston, “large-scale” means dairy farms with more than 500 cows and hog farms with more than 3,000 pigs. In order to reach these customers, the company makes its presence known at major agricultural industry trade shows, through social media, and through targeted press coverage.

So far, Thurston has found that the livestock industry is moving in a direction that has generally worked in his company’s favor. As the industry continues to consolidate into larger and larger operations, there is an ever-increasing need for wastewater management.

That being said, the company has been challenged by the industry’s resistance to change. For many years, the standard practice for large-scale agricultural operations has been to store manure in big lagoons. Livestock Water Recycling is faced with the task of convincing farmers why this is no longer their best option.

“LWR is a new technology and must work to enhance people’s perceptions of how manure should be handled and treated,” Thurston says. “We are not just introducing a new product; we are working to change an industry practice. Rather than using manure lagoons for storage, immediate treatment with an LWR system will capture the value of manure and protect the environment.”

According to Thurston, as they look toward the future, Livestock Water Recycling has one primary goal: to create a paradigm shift in manure management, and to do so in a way that will be financially fruitful and environmentally sound. Thurston believes they can reach this goal within the next five years.

Looking even further ahead, Thurston sees his company having a more extensive reach that will impact global agriculture as a whole.