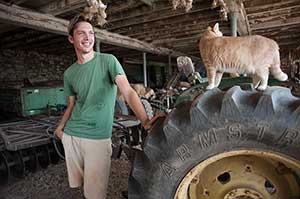 Landon Jefferies knew he wanted to pursue farming as a career, but the options in the city were limited.

So after spending a year working farmers’ markets for The Food Trust, a Philadelphia organization that works to ensure access to affordable, nutritious food and information, and three seasons as the manager of Wyck Home Farm, a Philadelphia historic home, garden and farm, he and partner Lindsey Shapiro set about launching Root Mass Farm in rural Berks County, Pennsylvania in the summer of 2011.

While Shapiro and Jefferies have learned a lot about farming over the years by trial and error, they still run into problems.

“We still mess up all the time,” says Shapiro. “Sometimes there are no right answers or best practices in farming — it all depends on circumstance and the particularities of our set up. We try new things, get them wrong, and readjust all the time.”

And while Shapiro and Jefferies don’t have a formal farming education or background (both grew up in the suburbs), they both have a willingness to experiment. “I think that’s helped us get our footing more than anything,” says Shapiro.

“It is a growing business,” she says. “The income from the farm is enough to cover the expenses and build some equity, while providing Landon and I with a decent salary on which to live.”

The farmers do their best to create a vibrant farm ecosystem, and use cover crops and composted manure, as well as compost, to add fertility and organic matter to the farm’s fields.

“We use little to no pesticides,” Shapiro says. “We create habitats for those natural predators by maintaining hedge rows and planting a diversity of annuals and perennials.”

The farmers also pay close attention to the soil before doing any sort of tillage to avoid unnecessary damage and try to keep their impact low while creating a suitable environment for growing crops.

Root Mass grows a little bit of everything to please its customers and to promote biodiversity on the farm.

“A diverse operation allows us to hedge our bets if something goes wrong and disrupts the pest and disease cycles endemic to monocultures,” Shapiro says. “We harvest produce from the farm from mid-April to mid-December, weather permitting, and sungold cherry tomatoes, butter lettuce and dragon carrots seem to be fan favorites.”

The farmers are currently farming three acres and plan to bring a fourth into cultivation next season.

“We may not grow stuff on all four acres, but we want to have enough space to rotate crops effectively and leave land fallow if need be,” says Shapiro. “Beyond that, we haven’t quite decided what to do. We may introduce a prepared foods side of the business or delve a little deeper into animal husbandry. We have to figure out what there’s a market for and how we want to spend our time.”

Currently, Root Mass sells at two Philadelphia farmers’ markets. While Shapiro and Jefferies run the farm, they get part-time help from friends and family.

“This season, we’re planning on bringing on some more official part-time help during the busiest months,” says Shapiro.

“Build your business incrementally, don’t be afraid and be prepared for failure,” she says. “In every season of a farm’s life, some crop will flounder or some animal will get sick; farmers just have to take things in stride, learn from our mistakes, and move forward.”