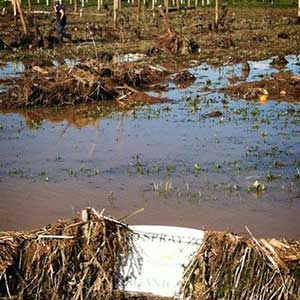 Damage to the farm’s perennial crops by the Boulder County Flood won’t be known until spring.
Photo Credit: Hannah DeHerrera

So far this startup has met with numerous weather related challenges. By adapting their business model and making use of urban space, Flipside Farm just completed its second harvest, demonstrating that fresh vegetable production doesn’t have to stop because of snow and flood.

Determining what crops to offer has been a combination of experimentation with growing conditions and understanding the local market. A call to the farmer’s market informed DeHerrera that many of the traditional crops were already saturating the local market.

“I started thinking I don’t want to get into a saturated market anyway, you’ve got to diversify,” says DeHerrera.

In their first season, the DeHerreras grew annuals in an unheated greenhouse successfully, providing their CSA members with winter greens. To complement the income of CSA annuals, Flipside Farm invested in the long-term by planting perennial fruit trees and shrubs.

And then the waters came.

“We were ground zero for that,” recalls DeHerrera. “We were seven feet under water for at least a week. It just came out of nowhere. It took paths no-one expected the water to take. Right now we are just assessing if we are going to have any income. We may have lost all our perennial crops, we don’t know.”

Because the flood altered the river’s path, water ditches on the farm may no longer be a viable water source. The DeHerreras won’t know for certain until spring.

In order to fulfill their CSA obligations, Flipside Farm temporarily relocated to town. The family had bought a home in Longmont just one month before the flood. In order to make the winter growing deadline of September 19, they quickly prepped space for hoop houses on their 1/3-acre urban lot.

The hoops proved to be the farm’s saving grace. Measuring 48 x 8 foot each, DeHerrera planted a variety of greens inside the hoops. Despite losing dandelions, lettuces and other soft greens, a healthy harvest of kale, chard and Asian greens survived for the first week of the farm’s CSA this January.

DeHerrera has followed the advice of well-known greenhouse gardener Elliot Coleman, using very little water to produce her winter crop. After using both the greenhouse and the hoop house methods, DeHerrera remains partial to the greenhouse.

“The greenhouse is definitely superior in several different ways,” says DeHerrera. “One is there’s a lot more room to move in there. I’ll spend a whole day in a crouch position and it starts to get uncomfortable after a while. I think the greenhouses gives you more of a buffer zone on the edges. In the hoops the stuff on the edges close to the snow does get damaged. The greenhouses and the quick hoops are totally unheated. We’ve never used any source of heat.”

Despite not having organic certification, Flipside Farm practices sustainable, pesticide-free growing methods, using crop diversity to reduce pests. They create their own compost, use woodchips as mulch to reduce watering and let their chickens glean inside the hoop houses while they fertilize the ground.

After they have assessed the situation on their farmland, Flipside Farm hopes to offer year-round produce to its CSA customers. In addition to this, DeHerrera planted tart apples and hops to attract home cider and beer enthusiasts. They hope their “you pick food forest” idea will take off as a complement to their traditional CSA model.

For now, DeHerrera is looking at their makeshift urban farm as a teaching opportunity.

“If no one has the chance to see these hoops out in our front yard, right off of the street, then no one’s ever going to know something can grow in there,” says DeHerrera. “People have to see a success before they can become open to the idea.”