Noah Fulmer is the director of training and capacity building at Local Orbit, which provides tools for the entrepreneurs and organizations building the New Food Economy. 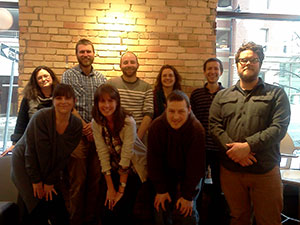 California just can’t catch a break when it comes to water.

As the New York Times noted recently, thousands of Cailfornia Central Valley acres now feature dusty fields where tomatoes and melons once grew. Without any water, fields are simply being left fallow.

Large scale, centralized production wasn’t always at a disadvantage in California. The dryness of inland areas like Fresno, Bakersfield and Temecula made them ideal for finely managing crop production with few pests. The sunny, relatively stable year-round climate couldn’t be beat. When crops needed water, tightly controlled irrigation was designed to draw upon snowmelt off the Sierra Nevada up north and from the Colorado River further south.

But population growth requires more water, and a changing climate has meant the Sierras have only 12 percent of normal snowpack levels this year. Empty fields may be the new normal. A drought declaration by Governor Jerry Brown in late January is likely to be only the first of many.

Chronic droughts are upending the current regime of California farming. Even where California growers switch to less water-intensive crops and varieties, there is only so much production you can do with a shrinking water supply.

So the billion dollar question is: how can the nation’s capitol for fruit and vegetable production adapt to changing water and climate realities?

For a perspective on a way forward, it’s helpful to look at the country’s second-most diverse agricultural producing state: Michigan.

In this “Third Coast” farming powerhouse, you can follow roads past endless fields of asparagus and tomatoes in the southwest part of the state, or berries and cherries near Traverse City, all destined for export to other states.

And yet, even without any water crisis, Michigan is already taking steps to implement new models of agriculture.

Like California’s, Michigan’s wholesale markets are often only accessible to large producers, processors and distributors, favoring national and global supply chains at cut-throat prices that disincentivize fair wages for labor and long-term land and water stewardship.

Amid Michigan’s large farms and processors, new ventures are sprouting up to provide a way for small farms to access wider markets for their products. At Local Orbit, we work with many entrepreneurs that are doing exactly that, and this spring we are leading Hub Camp trainings across the country to help people start up more.

In attendance at the Hub Camp in Michigan were farmers, farmers’ markets managers, managers of incubator kitchens, a retail food cooperative, a YMCA and a major food bank—all planning new businesses to move product from local farmers to schools, hospitals, chefs, grocers and everywhere else in their communities.

If you put Michigan Hub Camp attendees on a map, and then add other local food distribution businesses already in the Michigan Food Hub Network, you’d see the resurgence of a regional food economy that offers increased economic value to small Michigan farmers in every corner of the state.

If there’s less water to be had in California, the only choice may be to grow less and derive more value from what is grown. Many California farmers’ markets are already hubs for significant wholesale activity, and there is huge potential to scale up this activity with purposeful regional distribution built atop new or existing infrastructure.

As for Local Orbit, this spring we’re running more Hub Camp trainings in Los Angeles and Davis. At each Hub Camp, we will work with a new cohort of 15 aggregation and distribution entrepreneurs to refine their business operations.

They’ll be uniquely positioned at a time of great urgency. Given the uncertainty surrounding the water crisis, it is even more important to have a wider diversity of farming styles and local distribution networks to allow them to flourish.

We believe more diverse farming supported by regional distribution networks will help forge new pathways to sustain the California food shed for many years to come.

Are you working to expand local food distribution on the West Coast? We’re bringing like-minded entrepreneurs together with experienced food hub operators, topic experts and mentors to help you grow your business. If you, or someone you know is aggregating and distributing food from farms to chefs, universities and hospitals, tell them about Hub Camp!

This three-day intensive for local food distribution entrepreneurs offers practical training on operations and logistics, working with producers and marketing to wholesale buyers. Participants walk away with a six-month action plan for building a multi-farm aggregation and distribution business. With local topic experts on food safety, finance and legal issues. Space is limited, so apply early.