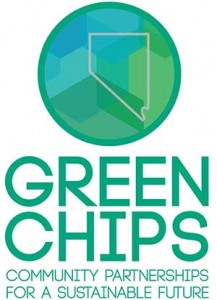 “We don’t farm, we don’t run CSAs, and we don’t manage community gardens,” says Green Chips executive director Rick VanDiepen. “But we offer data that supports and encourages all of these activities.”

The four-year-old organization grew from informal brainstorming sessions between Las Vegas casino sustainability executives. The group eventually sought out specific projects to devote their collective energy to, and Green Chips was born. The organization views itself as a public-private partnership with funding from public and private entities, such as the City of Las Vegas, local casinos and utilities. Its board includes representatives from public television, the visitor’s authority and local nonprofits.

“We wanted to be an impartial group, representing as many voices as possible,” says VanDiepen.

Though the nonprofit has pulled off some high-profile sustainability projects, most notably solar-powering the famous Las Vegas sign, most of its work is a good deal lower-key.

“We work on the kind of projects that give data to an urban planner to approve a new community garden, or raise the profile of a local CSA group,” VanDiepen notes. “It’s not glamorous.”

Green Chips observed that the lack of local farming hurts Las Vegas, which imports in excess of 90 percent of its fresh food, mostly from neighboring California.

“The food miles alone, from trucking and flying in produce, are bad for health, local roads and air quality,” says to VanDiepen. It’s an issue that’s close to the executive director’s heart, as he hails from the rich Californian farmlands of Modesto. The group is focusing on promoting local sustainable agriculture in Las Vegas’ arid desert environment via two specific projects.

The first is a web-based community portal that collates local Las Vegas urban food resources into a single searchable directory, similar to ones that the organization has already compiled in the renewable energy sector. The portal will launch within the next few weeks at the Green Chips website.

Green Chips consulted with experts to ensure that the portal is as useful as possible to its target audience of sustainable agriculture enthusiasts. In this case, the partners include the local cooperative extension and Green Our Planet, a crowdfunding platform which “helps to fund green projects around the world.”

The project is community based; stakeholders from urban gardens to food hubs will be given logins so that they can add information to the site. VanDiepen expects that the directory will allow consumers to find ways to buy and grow local food, and non-profits to find partners. “Our goal is to drive traffic to these initiatives,” he says.

A longer-term project is a web-based “Sustainability Atlas,” which will forecast the trajectory of food, transportation and water resources in the Las Vegas region, and how they overlap and impact local consumption over time. Based on a similar project in Arizona, it was requested by City of Las Vegas planners who wanted better data to understand the long-term impacts of their decisions.

Despite its reputation as “Sin City,” Las Vegas has fairly progressive policies when it comes to local food systems. For example, the city allows dedicated food truck parking in its downtown area. Planners hope the Atlas will help to facilitate innovative solutions such as high intensity urban farming.

Calling it an atlas is misleading, according to VanDiepen.

“It’s a good deal more interactive and visual than the name suggests,” he says. “We’re only two months into the project, but it has immense potential.”

Along with urban agriculture group Project AngelFaces and permaculture experts Great Basin Permaculture, Green Chips will be presenting at the March 1st Las Vegas viewing party for TEDxManhattan, whose theme is ‘Changing the Way We Eat’. Admission is free, but limited, and tickets are available at www.indooragnv.com.