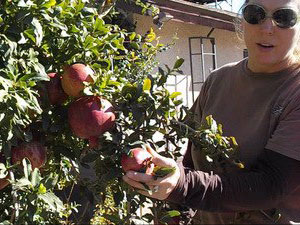 Rhonda Killough’s path to sustainable agriculture was an unusual one.  While pursuing a career in performing arts in Las Vegas, her life was abruptly stalled by a motorbike accident in 2002.

“I was physically broken, I couldn’t move very much so I mostly listened to NPR,” she recalls.  Two news reports in particular caught her ear. One described Las Vegas as the most wasteful city in the country, and the second outlined the impact of a lack of fresh produce on the incidence of diabetes in underprivileged communities.

As part of her recovery, Killough started taking brief walks around her neighborhood and got chatting with the groundskeeper at a neighbor’s large home.

“He was complaining about cleaning up the abundant fallen fruit from nine mature fruit trees on the grounds,” she recalls, “and it just struck me that the wasted fruit would be exactly what underprivileged communities needed.”

From this observation came the genesis of Project AngelFaces.

Founded in 2005, the organization finds innovative ways to get fresh produce in the hands of its target demographic of elders and youth at risk.  According to an NBC report, more than 7 percent of the Las Vegas population, nearly 43,000 people, do not have nearby supermarkets, so the need is a large one.

Project AngelFace’s signature program is the Neighborhood Fruit Harvest, where volunteers harvest fruit from backyards and private urban gardens around Las Vegas.  The team services up to 100 properties per season with an average of three trees per property, harvesting fruit that would otherwise become part of the waste stream. In the United States, 40 percent of food is wasted between the farm and the consumer, according to the National Resources Defense Council.

Project Angel Faces finds trees through word of mouth, with realtors and observant volunteers serving as especially rich sources of referrals.  Homeowners dictate when and how volunteers harvest and get the first pick of the crop if they wish; some even leave out bowls and baskets for volunteers to fill.

Killough works with homeowners to ensure that harvesting fits around their schedules and respects their land, but she also views part of her mission as changing the way that homeowners view their backyards.

“We encourage homeowners to see that they have farms, not waste, in their gardens,” she notes.

After harvest, the fruit is cleaned, separated and distributed to local partners.

“We work directly with nonprofit and social services organizations which serve elders and youth at-risk, and local community centers,” says Killough. “In this way we reach those people who fall through the cracks that food banks and pantries don’t reach.”

“There are food banks and community pantries doing great work locally, ao we concentrate on supplying them, not running our own soup kitchen,” says Killough, noting that the produce is normally consumed within twelve hours of delivery because of the immense demand.

“It’s a marketable skill that they can then use to find jobs, and it means more local farmers,” says Killough.

As with many community-focused movements, the organization is weaker when it comes to creating its own structure and administration than it is in serving the community.  Killough is in the process of applying for non-profit status, and is always looking for volunteers who are as passionate about the financial and organizational aspects of nonprofits as they are about the on-the-ground effort.  She’s also looking to build an active board.

Going forward, Killough sees immense potential. “Eighty-five percent of fruit on private land in the Vegas Valley area is never harvested,” she says. “We’d like to get to it all eventually.”