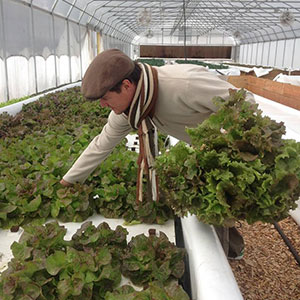 Jack Waite, founder of Agua Dulce Farm in Austin, Texas, is truly is a jack-of-all-trades.

By combining his varied background in accounting, engineering, botany and nonprofit management, he has realized his dream of running an aquaponics farm. In recent weeks, this interesting startup reached full operational capacity. Along the way, the farm’s journey has been tested with challenges and sprinkled with luck.

After looking everywhere inside Austin’s city limits for a potential facility, Waite was fortunate enough to find a friend who had a friend who had an unused three-acre farm in the city limits. The owner wanted to contribute to the sustainable ag movement but wasn’t able to do it personally. Waite entered into a very reasonable 30-year lease and began turning the land into a viable aquaponics farm.

After an expensive cleanup operation, Waite was left with a blank slate perfect for the construction of his two 32×50 square-foot greenhouses that are home to leafy greens grown using the deep water method. Agua Dulce Farm produces lettuces, kales, micro greens and a variety of fresh herbs.

The farm grows two types of fish: bluegill and catfish. With a four to five week turnaround time, Agua Dulce Farm produces 8,000 plants a month for the wholesale market.

“We have 12 grow beds total so we have six in each greenhouse 6×16 feet long and two feet deep,” explains Waite. “It’s a deep water culture so everything floats on styrofoam mats.”

Waite sells most of his produce on the wholesale market focusing on area restaurants. He has steered away from farmers’ markets for various reasons.

Luck and timing has played a role in helping Agua Dulce find its footing.

“Costs and capital are huge barriers for people,” says Waite. “I lucked out with my business plan, I was fortunate enough to find investors. I imagine a lot of people have a problem with that.”

City ordinances and regulations around aquaponics have also been a challenge for Waite, but he says Austin is moving in the right direction.

“A lot of people don’t know what’s going on and don’t know if they should permit it or not,” he says. “It’s been a lot of education along the way to teach people what you’re doing.”

“The best advice I ever had was just start out modular,” shares Waite. “Try one little setup. Experiment, because it all depends on where you are. There’s no cookie cutter way, you don’t just read it in a book and say ‘okay that’s how I’m going to do it.’ I think starting small and replicating that system is the best way to do it. People get into really big trouble when they try to do these grand, really integrated systems. When you have a grand integrated system and something goes wrong, everything goes dead. It will sink you.”

Recently, Waite hired a returning veteran with an interest in farming to act as general manager of the farm.  Currently researching partnerships, grants and seeking investors to help realize the nonprofit side of his business, Waite hopes to provide fresh aquaponically grown vegetables to Austin citizens regardless of their income level.

“What I want to do is start a nonprofit for sustainable agriculture,” he says. “I need to find matching funds so we can charge half price. I can’t afford to charge half price but I don’t want to just sell to fancy restaurants. If there is an agency out there that can match the funds, I want to help people eat better. I want to step away from the day to day farming and find a way to make it affordable for more people.”