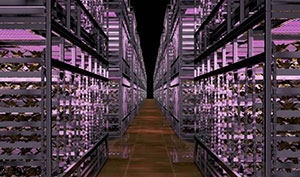 Inside a converted barn or grocery store basement, the growing cubes are stacked horizontally and vertically for the best use of space. Photo Courtesy of Urban Barns

On the verge of opening their new Quebec store, Canadian startup Urban Barns looks set to be a leader in the sustainable grocery store industry, both in Canada and the United States.

After careful planning and four years of intense research and development, Urban Barns launched in 2012 with a goal of growing produce as close to customers as possible. Initially, Urban Barns wants to sell sustainable leafy greens to the wholesale market. They believe their patented growing cubes are the perfect way to do that.

Richard Groome is President and Director of Strategic Marketing for Urban Barns.

“After many years of work, testing and trying, our partners Jack and Leo Benne basically perfected the cubic farming machine,” says Groome. “We’ve developed a system whereby the plants are on a rotation below LED lights, a conveyer belt essentially. Each cycle takes between an 1-2 hours from start to finish. We can set up about 136 trays in the machine and between 1300 and 1800 plants depending on what we’re growing. It took the right LED lighting system to complete the growing system.”

Using their growing cubes, Urban Barns has drastically reduced production turnover rates while growing what Groome believes to be a superior product.

Urban Barns’ ultimate goal is to establish their own stores and house the hydroponics system in the basements of the stores, which will virtually eliminate the carbon footprint and costs of food transport. A fresher product at a lower price point will be a side benefit of this approach, says Groome, who believes hydroponic growing is the way forward for all food production.

“I wouldn’t say the existing hydroponic systems are inadequate at all,” he says. “But we think our product is interesting because you can grow it in a local barn or warehouse that we can retrofit close to the city. Our cubic faming machines use horizontal as well as vertical space, and most of the existing hydroponics systems use sunlight and supplement with LED or sodium lights—we are 100 percent LED light.”

In this initial stage of production and marketing, Urban Barns is targeting the institutional food services industry, cruise ships, hotels and bars as their first customers. They then hope to establish partnerships with American grocery stores and boutique food stores while moving toward their own chain of stores.

Their next facility will be in Montreal. McGill University’s Agricultural School has agreed to assist Urban

Barns with their continued research into propagation and production efficiency. The company hopes production will spread from Canada to the United States down the Eastern seaboard through the Midwest and eventually to the American West Coast.

“Make sure you have customers who will buy your product at a fair price and make sure you know what your costs are,” he advises. “If you don’t know what your costs are it’s very difficult to determine what your price is. A company needs to bring a product to market that is not only competitively priced but that people will like and appreciate. If you can’t produce a profit your business model is not sustainable.”