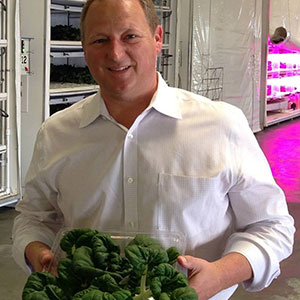 “I leverage technology, material handling and hydroponics together in a way that has not been done before, to make a meaningful impact on the ability to produce food, anywhere, anytime, pesticide-free and for a lower cost,” says Steve Fambro, who founded Famgro Farms in 2010.

Fambro’s self-contained macro farm units utilize a hydroponic growing system that optimizes the use of light, space, nutrients and water for chemical-free crop production at a low cost, says Fambro. The units can be set up almost anywhere.  Famgro Farms’ current growing and harvesting facility is situated inside a former surfboard factory that offers 13,000 square feet of production space.

“Our units can be stacked vertically or they can be flat,” says Fambro, who believes his system eliminates the majority of issues faced with traditional vertical hydroponic systems. The design of the macro farm, says Fambro, allows workers to seed and harvest beds in record time.

For Fambro, it’s about efficient design and use of space, combined with respect for the workers.

“We’ve got a labor issue in California that people don’t want to talk about.” says Fambro. “We have a permanent underclass of people that are just exploited. They have no recourse if they are forced to work overtime. Most of farming is dependent on a sort of broken labor model, so we started with a new slate. First and foremost is respect for the worker. They have to be paid a fair wage, full-time workers should have healthcare and have work that’s not back breaking but meaningful to them. That’s our approach to farming. It’s a different way of doing it.”

After careful consideration, Fambro chose hydroponics over aquaponics, due to concerns over the potential for contaminants in aquaculture.

“Listeria grows on the gills of fish and I’m not convinced that any aquaponic or fish-based nutrient is free of listeria or potential listeria contamination risk,” says Fambro.  “The fish emulsions are made from the waste of commercial fishing operations. Those older fish are brimming with mercury, so that’s in the food chain as well. So there’s listeria, there’s mercury and it’s just the fundamental cross-over risk of any animal pathogen in the fresh vegetable food chain.”

Because Fambro Farms has eliminated all animal-based products from the system, Fambro prefers to market the business as a “vegan farm.”

Clean food is a high concern for Fambro, as he feels it should be for all sustainable agriculture. At Famgro Farms, there are no pesticides used and workers wear gloves when handling the produce. Pest control is simple at Famgro Farms as each macro farm unit is self-contained, so any issues are isolated to that individual unit.

Famgro Farms’ most popular product may be its sweet kale, but the company also produces arugula, basil, cilantro, pac-choi and a number of micro greens for the restaurant industry. The bulk of the produce is sold on the wholesale market to regional supermarkets and grocery stores. Several restaurants in San Francisco and Los Angeles feature Famgro Farms products on their menu.

Fambro developed his system in his garage and used his personal savings to get the farm started. Having spent a lot of time and effort perfecting his growing system, Fambro hopes it’s just the beginning. Currently he does not plan to produce the macro farm unit for the retail market.

“We created a very high-value brand of pure, fresh local greens, and we want to be able to bring that brand to every big population center across the country and other countries as well,” he says.