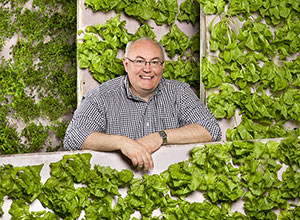 In 2010, Dave Roeser sold his two businesses, leaving him with an empty warehouse in suburban St. Paul, Minnesota. Along with his wife and son, he created Garden Fresh Farms, transforming his building into a profitable and innovative aquaponic operation.

The company’s indoor farm produces rainbow trout, tilapia, herbs, and greens for its own CSA as well as area colleges, corporate dining facilities, restaurants, and grocery stores. Roeser has also begun to market his patented equipment and agricultural techniques to growers as far away as Japan and Siberia.

Recently, the farm has added a second indoor agricultural operation in the city of St. Paul, along with the original farm in the city’s suburbs. Because it is not weather-dependent and does not require as much land as traditional agriculture, Roeser believes indoor agriculture will be a sustainable solution for any place with scarce resources.

“Indoor ag is good for places where space and water are issues, as well as food security,” says Roeser.  “For the Middle East, where they have to import all their food, or China, which is a vast land, but not a lot of its land is good for agriculture, and distribution is a problem. Or take Siberia, a three-day train ride from Moscow. How do you get food there, and how long does it stay fresh?”

Roeser wants to develop a global network of indoor farms growing and harvesting food year-round in close proximity to consumers. He believes sustainability and profitability are both possible through capital investment, careful use of resources, and less waste. He notes proudly that everything is recycled in his indoor farm operations. “We don’t even have a garbage can,” he says.

It was no accident that Roeser, along with his wife D.J. and son Bryan, chose to pursue aquaponics. Roeser has always been an advocate for sustainability in other areas of his professional and personal life.  As he became aware of the growing interest in locally sourced food in the St. Paul community, he looked at his and D.J.’s background in business and Bryan’s background in biology, and saw an opportunity to build an aquaponic system from the ground up—except that there is no ground, because water is the growing medium.

Adapting the principles of aquaponics and customizing for their site, the Roesers invented their own energy efficient indoor closed loop system in which fish provide the waste that fertilizes the plants, which in turn cleanse the water for the fish. All the water is recycled, using just a fraction of that needed for traditional agriculture. The Roesers pioneered a technique of growing plants just inches from the light source, producing plants with larger leaves and smaller stalks so that more of the plant can be utilized. Some of the electricity is provided by solar energy, which helps reduce costs and energy use.

Garden Fresh Farms’ operations total about 43,000 square feet, producing as much crop as 100 acres of farmland could grow. The company won the 2013 CleanTech Open National Sustainability Award for its unique approach to aquaponics.

“I grew up in the city,” says Roeser, who hails from Chicago. “I had no preconceived notions about farming. I just wanted to know how I could use the space and the energy as efficiently as possible, make it easy for people to harvest, and make the business profitable.”