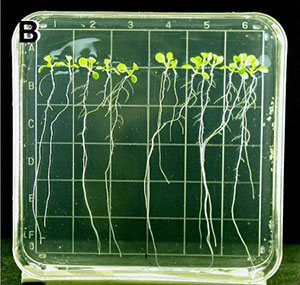 One of NASA’s seedling experiments to discover how low pressure and oxygen affects the growth of Arabidopsis. Photo courtesy of Dr. Anna-Lisa Paul.

The seed has been planted for agriculture in space.

We’ve grown Swiss chard and zucchini on the space station, and next year NASA hopes to grow the first crops on the moon  in a can.

As space travel becomes more feasible, scientists have found that agriculture will be just as foundational to actual spaceships as it is to “spaceship earth,” an old concept that calls for our planet’s inhabitants to view themselves as a single harmonious crew.

As any old rocket scientist can tell you, the primary obstacle to space colonies isn’t food scarcity, it’s fuel costs.  Each NASA shuttle mission to the International Space Station cost about $500 million in fuel, and each pound of cargo cost about $10,000.  But the Shuttle is gone, and game is changing.

The private company SpaceX’s newest rocket will be able to charge a mere $1000 per pound of cargo. Technologies that used to belong in science fiction could be realistic soon, like the VASIMR ion engine or the enormous solar sail that will be launched by Sunjammer next year.

If humans can reach the stars, then they’ll need something to eat when they get there.

Most importantly, plants seem almost entirely unconcerned with a lack of gravity.  As long as plants have light to grow towards and nutrients around their roots, they still orient themselves correctly. Dr. Anna-Lisa Paul and Dr. Robert Ferl, who both helped design and study plant systems used on the International Space Station are confident about plants’ extraterrestrial future and working to eliminate their obstacles.

“Plants do fine in microgravity,” says Paul.  “The problem is that hot air doesn’t rise, which means gasses will just stay there unless you actively mix them.”

So would-be space farmers will need to pay special attention to air circulation and irrigation systems that can’t use gravity to move water. Similarly, pressure will have to be closely controlled to ensure healthy growth, otherwise plants will die off in the same way they would in a drought.

Nutrient deficiencies are another problem.  The moon has an abundance of iron and Mars has some phosphorus, but for other essential minerals such as nitrogen, astronauts will either have to bring fertilizer with them or produce it from recycled biological waste.

In fact, using plants to process waste is a big part of what scientists think life support systems will end up looking like.  Plants can use the gas, liquid, and solid wastes that come with humans to produce fresh oxygen, clean water, and food. Beyond agricultural plants, some scientists are finding that the most effective waste recycling systems may be fast-growing algae.

Scientists like Dr. Paul and Dr. Ferl are selectively breeding plants that can overcome space problems and fit into life-support systems, but there is a limit to what biologists can do.

“Everything will have to be grown within a pressurized greenhouse, and those costs are great,” says Paul.  “The more expensive the structural materials required, the more difficult it is to create working plant systems. In the near future, it will all be about physical engineering.”

Specialized space architects, who have been empowered by new private growth in the industry, are doing that type of engineering. Sam Ximenes is one such architect. He designs structures that can survive external threats on the moon.

For example, space architecture must endure extreme temperature variations (between -153°C and 107°C), small meteorite impacts (which routinely poke holes in satellites), and unfiltered cosmic radiation (which can kill humans and plants alike).  Earth’s atmosphere prevents these from affecting us on Earth, but in space there is no convenient barrier. Instead of relying exclusively on expensive materials to combat them, Ximenes wants to use one of humanity’s oldest tricks in the book.

He figures if you need shelter, find a cave.

The cave that Ximenes has been designing for is large enough to house an inflatable dome that would allow humans to move around freely without space suits.  Agriculture systems could operate in the pressurized environment, providing a vital component of the colony’s life support system.

The moon has caves, but different locations in space have different advantages and obstacles. The Moon is close for resupply missions, but its soil is sharp and lacks nutrients.  Mars has some available fertilizer and gravity, but is much further away.  Orbital stations’ lack of gravity enables incredible designs with minimal supports, but it also makes irrigation and air circulation much more difficult.

Space Benefits Back on Earth

Farming in any of these places is still a far way off. Reconnaissance and brainstorming are occurring now, and robots are being deployed to better explore the lunar, Martian, and orbital environments.

For now, only universities and government agencies are actively researching space plant systems, while private companies do most space research. But the time when we farm in space may still be less than a lifetime away.

Just as NASA spurred the creation of micro-chips, long-lasting batteries, and memory foam mattresses, scientists working to create a successful life support system in space might help mere earthlings with their own planetary life support system.

“Anytime you are constrained to develop and experiment a system by something as rigid as spaceflight, you can translate the lessons learned to a system where you have 10 times those kinds of resources,” says Paul.  “You can still do it far more efficiently and deal with challenges you haven’t yet resolved.”

Similar innovations in space agriculture towards sustainability could be on their way to providing spinoff benefits on earth.  Recycling waste streams into usable fertilizers and clean water could fundamentally disrupt problems with scarcity. Efficiently converting carbon dioxide with plants could help sequestration of greenhouse gasses, and portable greenhouses could enable rugged climates to grow locally. New technologies could make hydroponic farms more competitive by dropping their largest costs, namely labor and electricity use. External conditions will force plant systems in space to use automation and energy conservation strategies, which would be readily adaptable into terrestrial systems.

Hydroponics already enables agriculture to use less water, pesticide, and fertilizer.  Making these farms more competitive while equipping them with tools to waste less and use more means that the plant systems on our spaceships may help us protect spaceship earth.