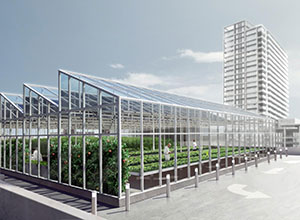 Aaron Quesnel has lofty goals for his Vancouver company Sky Harvest, but to reach them he needs to start at ground level.

The ultimate goal for Sky Harvest is a 12,000 square foot rooftop greenhouse that will grow a variety of produce. For now, though, the startup is working staying close to the ground, laying a foundation and making a name for itself.

“Seeing how your food is produced is pretty important,” says Quesnel. “Sky Harvest wants to do that on a large scale, on a rooftop greenhouse with lots of interest and attention.”

Quesnel is hoping this project will also appeal to younger people and show them that although cities are currently far removed from their food sources, they don’t always need to be. He is committed to the idea that urban dwellers need to be reconnected to the natural world, and he intends to work towards accomplishing this goal by growing food right in the center of the city.

“You can walk to the farm from your condo,” he says. “There are opportunities to dream big.”

To reach this sky-high goal, Quesnel made the strategic decision to, literally, build the business from the ground up with something that requires significantly less capital, yet replicates many of the goals and techniques of the rooftop greenhouse. So, for the past year, he has been growing microgreens in a downtown warehouse that houses other food enterprises. He hopes this will build up his brand recognition with networks of chefs in the city, to ease the transition into larger crops.

Quesnel harvests microgreens in the morning and has them delivered to his restaurateur clients in the afternoon by bicycle. This not only makes practical sense, as bikes can avoid traffic and coast right up to the doors of restaurants instead of waiting to get into loading bays, but it also furthers his environmental goals.

Although Sky Harvest is a for-profit company, Quesnel designed the start up to be a social enterprise that creates positive change. For example, he consulted with Atira Women’s Resource Society on a project for their women’s shelter. They needed help in creating an edible rooftop garden that would empower their residents to grow their own food. He also donates excess product to local food banks.

Ultimately, Quesnel hopes to change the way city dwellers think about their food.

“Urban dwellers are somewhat disconnected from the natural environment as a whole,” he explains. “When you live in the city, you slowly make that your environment, but there is a growing disconnect, and one of those disconnects is around food. People truly don’t think about where their food is coming from. Bringing food back into the city allows people to make a connection with what they’re eating and to understand the bigger systems out there, not just with food but with people around their food.”

In his current facility, Quesnel plans to expand into petite greens (which are slightly older microgreens), but in order to produce more complex crops like tomatoes and mature greens, he would need to move into his proposed rooftop greenhouse space.

The timetable to establish the rooftop greenhouse is up in the air, says Quesnel, but he hopes to move forward with the plan over the next couple of years. He’s assessed a few sites in Vancouver and elsewhere and talked with partners, but it’s an intricate process that needs extensive planning.

”Everything from the engineering aspects to the city planning and zoning; there are a lot of things that haven’t been done before, or very few people have done them, so there’s a lot of complexities,” he explains.