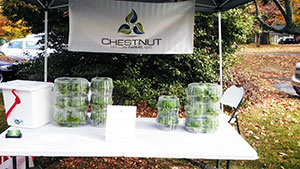 It is no surprise that Harold Blackwell launched his venture into commercial agriculture with a sound business plan.

An investment banker by day, Blackwell started gardening outside as a hobby, something to do during his off hours to de-stress from the workday. But he could only take that so far in Connecticut, when outdoor gardening pauses during the winter.

To solve this problem, he began with small pots of herbs grown indoors, and then expanded into a small hydroponics set-up. He was pleasantly surprised at the quality of his results, and after a few years had the fortune to meet a commercial hydroponics grower in Bridgeport who showed him the ways of growing hydroponically at a commercial scale for a living.

Although many vegetables can be grown hydroponically, Blackwell strategically decided to focus on the leafy greens because he saw a gap in the market.

“In Fairfield County, unless it’s the summertime, there really aren’t a lot of greens available, especially lettuce,” he says. “A lot of the lettuce sold in Fairfield comes from southern California. My thought was, if we’re getting lettuce shipped in from California, it’s clearly not going to be as good as the produce grown here locally. I thought I could try to compete in the market based on the quality of my produce. If I harvest in the morning, within an hour and a half, it can be on the grocery store shelves.”

His hydroponics system started with a $150 16-square-foot custom-built system and has since expanded into a $3,000 system from American Hydroponics, a hydroponics supply and consulting firm.

“They’re very good,” says Blackwell. “They help out, they give you advice and consult with you, and they’re great in terms of relationships that they already have in the system and can point you in the right direction for support leads.”

Blackwell is committed to reducing the impact of his production on the environment. For example, he turned towards ladybugs instead of pesticides when faced with an aphid invasion. His hydroponics system recirculates the water so none of the growing solution ends up in the watershed, and the growing solution itself is made from all-natural ingredients such as seaweed and kelp.

This commitment appeals to his customers as well as his own sensibilities.

“When you’re selling live or living lettuce, and you can attest that it is pesticide-free, and your water is free from bad inorganic substances, then of course, it’s good for marketing,” he says. “People want to know what goes into their food, and if I can stand before them at a farmers’ markets and tell them what I’m putting in and what I’m not putting in, they’re sold.”

Chestnut Hollow has yet to turn a profit, but Blackwell is confident in his business plan. He is already looking into expanding to meet demand. The Connecticut Department of Agriculture is trying to reach a goal of having five percent of food sold in grocery stores and restaurants to be grown within the state, so he sees a business like his as in demand to meet that need, especially since agricultural land in Connecticut is limited. Additionally, he says Fairfield County is filled with people who are committed to eating healthy, sustainably grown food, and they have the ability to afford such higher quality produce.

Although Blackwell would like to expand his farm, possibly to include in-ground growing, he is still working a full-time job. This has been a blessing and an obstacle.

“Being a new kid on the block, you have issues to overcome in terms of capital, initially,” says Blackwell. “One benefit is that I’m still working a full-time job, so that helps with a lot of the overhead costs and expenses, but it’s also a constraint because I’m not able to do this at a full-time level. It’s one of those things where I’m trying to find the proper balance between my day job and my career on the side.”