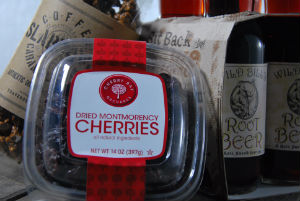 Cherry Capital Foods opened business in 2007 with a single man selling local produce out of his van. The following year, John Hoagland bought the business and took it to the next level.

“As a distributor, Cherry Capital Foods picks up and delivers to schools, restaurants and other institutions,” says Evan Smith, chief of operations and spokesperson for Cherry Capital Foods. “We’re part of the value chain that connects local to local. A value chain is like a supply chain but it’s more transparent and collaborative so that everyone along the chain is valued. In a value chain, everyone earns a living and it is benefiting everyone along the way.”

Transparency is important for a value chain, according to Smith.

“We openly negotiate our markups and pricing with our vendors and end users,” he says. “That way, you have a relationship with the end user. We also work to increase the understanding of the vulnerabilities of our food system—that you may not have broccoli because the crop froze, for example. There’s always a vulnerability with food supply, no matter what the size is. Educating people allows the end user to make connections with their food and where it comes from. Too many people think that meat comes with a Styrofoam tray.”

Connecting people with the foods they eat and the producers who grow it is a critical aspect of Cherry Capital Food’s value proposition, according to Smith.

“We’re also doing some cutting-edge work on ‘track and trace’,” he adds. “We’ve been working with companies to develop a system that allows us to identify food freshness from farm to buyer.”

To comply with the Food Safety Modernization Act, Cherry Capital Foods makes sure all foods are within the accepted temperature parameters, and maintains those temperature parameters all the way through the distribution process by using standardized handling and tracking protocols, according to Smith.

“It goes back to the concept of the value chain versus the supply chain,” he says. “In order to have a sustainable regional food system, everyone needs to earn a living and you cannot be marginalizing those who supply the work.”

And to be truly sustainable, a local food system must be resilient, according to Smith.

“The resiliency speaks to the fact that your circumstance may change but your ability to adjust to those disruptions needs to be there,” he says. “A resilient food system does not rely on just one system; it is not dependent on a single source. To be intelligent, you want to have multiple choices. We, as a food hub, have second, third and fourth choices and on down the line.”

Though Cherry Capital Foods is not yet profitable, Smith estimates that it will be within two years.

“So far, we’ve been investing in infrastructure,” he says. “Our growth has been astronomical: 48 percent in 2013, 65 percent last year in 2012 and 57 percent the year before that. This is very much a volume business. We know we’re going to need to be doing about $3.5 to $4 million in sales.”

Marketing the company has not been difficult, according to Smith.

“The interest in local foods is so phenomenal,” he says. “We don’t have to do much marketing. We initially targeted grocery stores as the main driver for our long-term success, then restaurants—they have changing menus and the most flexibility in the pricing model.”

“We have a unique culture here,” says Smith. “A large number of wineries are coming into maturity now. Schools want to feed kids better foods, and hospitals realize people are demanding better foods. We’ve become, by default, the solution of choice.”

With demand being way ahead of the supply, the future looks bright for Cherry Capital Foods, says Smith.

“There’s a lot of activity around local food in the state of Michigan,” he says. “We’re probably one of the leaders in the nation—maybe because of the unique micro climate we have.”

The willingness to explore change plus a state government that is catching on to the importance of local agriculture as an economically viable industry are a couple of reasons why Cherry Capital Foods is enjoying success, according to Smith.

“There are so many opportunities around for economic development,” he says. “I’d love to see an interconnected group of food hubs that are like-minded.”

Then he adds, with a laugh, “And, really, I just want to change the way we eat!”