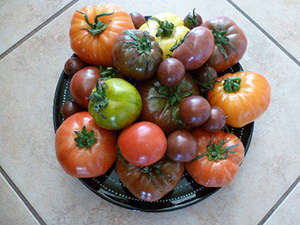 “There are just so many heirloom varieties with tastes that are over the top delicious!” explains Holy City Farm owner Shawn Ransford.
(Photo by Shawn Ransford)

There are tomatoes, and then there are hydroponically grown heirloom tomatoes. While the former may be easier to grow, the latter are prized by chefs in Charleston’s finest restaurants.

“Heirloom varieties all grow differently and are finicky at best,” says Holy City Farms owner Shawn Ransford. “I understand why most greenhouse growers focus on the less ‘tasteful’ varieties; they have consistent growth patterns, are disease resistant and have high yields. To be honest, I often dream of doing the same. However, I remind myself that that is not what we do here. Taste is our number one priority.”

Ransford and his family grew tomatoes as a hobby for years. In 2010, they incorporated and sold tomato plants out of their small backyard greenhouse to coworkers and friends as a way to supplement the family’s income. Ransford soon began looking for ways to extend the market past spring.

“That was the beginning of a trial-by-error education that lasted several years,” Ransford says. Within the year, Holy City Farms was selling tomatoes to two local restaurants. Hydroponics made a year-round growing season possible and appealed to the engineer in Ransford.

“I grew in soil for a while, but quickly found the control in hydroponics superior,” he says. “Having access to every variable is necessary to dial in taste and yields. I still consider myself an engineer; I orchestrate every aspect of greenhouse operations, from the boiler to crop steering to sales.”

Holy City Farm is located in Wadmalaw, South Carolina, just 20 minutes from downtown Charleston and some of the world’s best chefs. Once Ransford began selling consistently to two local restaurants, he saw an opportunity to sell tomatoes full-time.

“We have ten acres, which allows room for expansion,” Ransford explains. The farm’s new greenhouse is 13,000 square feet, with an 1800 square foot headhouse. The Ransfords currently grow 3000 plants, and plan for Holy City Farms to be self-sustaining by the end of second quarter of 2014.

The farm markets directly to restaurants as a primary source of revenue, and also hosts a table at a local farmers market. Ransford also finds experimenting with other outlets a boon.

“We recently had a Facebook sale, which was quite successful,” he says. People let him know they wanted a box and he set up a pickup window. “They were thrilled with the opportunity to buy directly from us and get a taste of what the chefs have had access to.”

The environmental benefits of hydroponics are not lost amidst the farm’s success and drive for flavor. Holy City Farms recycles and recirculates 100 percent of its irrigation water and use no synthetic pesticides, herbicides or fungicides. For a growing medium, they use coco coir, a fabric made of coconut husk that can be reused by other farmers.

“We have no interest in making a negative impact on the environment or someone’s health. It just makes sense,” says Ransford. “We also want to be able to pick a tomato off the vine and eat it, and not stress about some nasty pesticide.”

The Ransford family hopes to expand Holy City Farms by building more greenhouses in the years ahead and supplying a larger market.

“We are pushing to find the best tomatoes and ways to get those tomatoes to the table,” says Ransford, who has found that collaborative efforts with the chefs assist in this venture. “If it doesn’t taste good, we have no interest in growing it!”