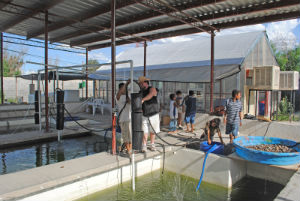 : A view of an aquaponics facility in Mexico built with help from Aquaponics & Earth (photo taken by Teresa
Musser)

In 1979, John Musser embarked on an expedition into the rugged far reaches of America’s southern neighbor to visit Mexican orphanages, where he witnessed both hungry children and food waste.

Upon his return, Musser founded the Texas-based non-profit Aquaponics & Earth and stepped up to the challenge of helping orphans in Mexico and across the world secure adequate nutrition. Through hardware and education, Musser’s organization enables orphanages to become self-sustaining, freeing themselves from dependence on food aid.

Musser speaks with the excitement of one capable of magic. But the excitement he derives from his work comes from an awareness that there is no great secret to producing food.

“I tell people all you need is one tenth of an acre, 2 to 3 rabbits and fish to make some of the most powerful fertilizer in the world,” says Musser. “On one tenth of an acre this year we produced 50,000 peppers and 150 quarts of tomatoes. We grew so much dill we procrastinated over what to do with it all, then we came up with four ways to preserve it. We made dill butter, soup broth from the stalks, froze it in ice cubes, and dehydrated the rest.”

Musser recognized the failings of conventional food aid after witnessing children in orphanages forced to get by on one meal per day and sometimes less, because they were dependent exclusively on food shipped from afar. So he turned his attention and energy to simple, low-cost, efficient food production methods.

Too often, politics or simple logistical snags delayed life saving shipments, says Musser. And while this fact frustrated him, another fact troubled him even more: food that did manage to reach orphanages frequently went to waste. Surplus fruits and vegetables would spoil in storage. Orphanage personnel lacked training in canning and composting. As a result, orphanages were forced to live shipment-to-shipment. When food aid deliveries failed to materialize, children went hungry.

“I got fed up with it, with the welfare system,” says Musser, explaining how he came to resolve to put power in the hands of those in need.

In the 1990’s, Musser set to work in earnest to address the orphanages’ need for self-sufficiency.

Upon considering the problem, Musser saw that the solution lay in a closed aquaponics system. Many of the orphanages are located in areas not suitable for agriculture due to a shallow soil substrate. Linking fish husbandry with hydroponic food production eliminates this problem, since the system is soil-less.

A closed aquaponic system also provides a tremendous advantage in water-stressed regions because the water used is recycled. And because nutrient-rich water is constantly made available to the crops in production, plant growth increases while the need for space is reduced. The only limiting factor is sunlight.

“I’m about pioneering something out of nothing,” Musser says, noting that the purpose of his organization is to help eradicate the mentality of poverty at its roots.

Musser posits that poverty persists in large part because of learned behavior, specifically learned helplessness. He saw that the full value of donated food was not being realized due to failure to preserve what could not immediately be consumed, and that food gone bad was treated as garbage since no one at the orphanage knew about composting. Musser reasoned that ignorance was the cause, and that education was required, along with a certain amount of prodding.

“I am teaching people to go up against poverty,” Musser explains. By training people how to compost and how to preserve food with canning, the organization seeks to educate people on making the most of limited resources.

Currently, Musser and staff from Aquaponics & Earth, including Musser’s wife Teresa, deliver their assistance and knowledge to orphanages near and far. One orphanage they have worked with for years is located in New Loredo on the Mexican border. And last year, Aquaponics & Earth shipped international bulk containers to Haiti where they will serve as breeding tanks for tilapia fish. The food produced by the aquaponic systems will feed children orphaned by the catastrophic earthquake of 2010.

Back at Aquaponics and Earth’s seventeen-acre home in Desoto, Texas, work continues year-round. The Mussers offer tours of the facility and run classes on sustainable living, tilapia farming, and organic growing practices. Through the organization’s website they also run a store where people can purchase the equipment needed to get started in aquaponics.

“We get 200 calls a week. We do this 24/7,” says Musser. He also notes a growing interest in his organization by universities such as Texas A &M, as well as aquaponic experts intrigued by his systems.

Although busy, Musser still manages to look ahead. He sees potential in eco-tourism.

“I’m not sure if it’s our final destiny,” said Musser in a tone suggesting that it just might be.