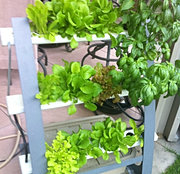 From garden towers to upside-down tomato hangers, the concept of a ‘grow your own’ kit is nothing new.

But the folks at Mobile Farming think they may finally have created a hydroponic gardening system that’s affordable, realistic and accessible to everyone with Garden Stand. The unit is American-made, MIT-patented and grows enough organic vegetables and herbs to feed a family of four. And according to its creators, we can expect to see it on the retail market as soon as summer 2014.

The Garden Stand is the brainchild of Amy Cooper, Richard O’Connor and Richard Probst, who founded the Mobile Farming company, With a collective background in investment banking, marketing and entrepreneurial pursuits, the three formed the company in 2011 after O’Connor had a life-changing experience at a San Diego restaurant.

“When I saw this system on the rooftop, I couldn’t believe how simple it was: water, gravity and nutrients,” says O’Connor. “I think the general public, when they think of hydroponics, assume it’s complicated. It’s not complicated. This is going to be a paradigm shift for produce.”

The Garden Stand is a mobile hydroponic grow system. The original design featured an aluminum rain gutter framework. That design has morphed into a tri-level, free-standing pipe system with holes for seed pots and a pump to circulate water around the root systems. Maintenance consists of topping up the water running through the framework and adding nutrients to the water when needed, typically once per month. As soon as one crop is harvested, a new seed pod can be germinated immediately. The unit is made of both virgin and recycled plastic and will be manufactured in Los Angeles.

“I would have to say the biggest challenge is finding the right people and having the capital to launch your product,” says O’Connor. “We come from an investment banking background and have the ability, through private equity, to put the funds together for a stock offering that allowed us to file the patent, build the prototype, do the test marketing and build the first phase of the company.”

Although still in the testing phase, the Garden Stand is expected to branch out of its southern California test market in early spring and be available nationwide by next summer. Garden
Stand owners will be able to purchase nutrients (a basic N-P-K 20-20-20 mix) and heirloom seeds through a monthly direct mail plan.

“What we have developed are seed pods that look exactly like coffee pods,” explains Cooper. “The net pots are on the bottom. We have the plant medium the seeds are sitting in and then it seals with a little foil seal that you peel off then pop into the stand.”

Mobile Farming will offer different packages of seed mixes, such as a taco kit or a pizza kit to help educate younger family members on food origin.

“What it does is educate children that tacos don’t come from Taco Bell–they come from the ground,” says O’Connor. “You have lettuce, you have onions, you have tomato and you can add oregano and parsley, so there will be different kits,”