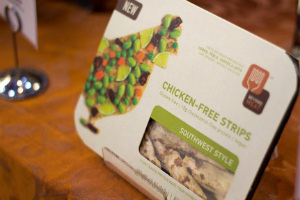 Photo courtesy of Beyond Meat

Brown points out that until the discovery of fire and man’s ability to cook raw, bacteria-ridden meat into something our bodies could safely consume, it was plants all the way. And now, Brown’s company, Beyond Meat, is stepping up as a leader in plant based meat alternatives that may encourage you to think again about meat substitutes.

Collaboration with the University of Missouri and the University of Maryland, together with start-up investment from the Obvious Corporation and Kleiner Perkins Caufield & Byers, has provided Brown’s company with a healthy start. Since launching their retail chicken-free chicken product in 2013, Beyond Meat has enjoyed a steady rise in customers and sales, and is a leading brand in the prepared food section of the organic grocer. Bags of the chicken alternative are available for purchase online through retailers targeting vegans, but the majority of  products are sold wholesale to cafeterias and grocery stores.

Production of the Beyond Meat product takes place in a facility in Columbia, Missouri. As Brown explains, the University of Missouri has researched soy-based meat alternatives for several years and it makes sense to have production as close to the outlet of new research as possible. The production facility stores and prepares all the many plant-based ingredients for the chicken alternative, readying it for distribution through Whole Foods and smaller regional grocery stores. Currently, the production facility employs 65 people and can produce the equivalent of 1.5 million chickens annually.

Getting folks to adapt to Beyond Meat’s plant protein has been fraught with several challenges. Meat eaters who have observed of the evolution of meat alternatives will recall, perhaps unkindly, the texture of TVP burgers or the blandness of tofu. To truly capture the mainstream consumer, a real meat alternative must not only taste like meat but look like meat, have a similar structure to meat and hold the same mass appeal as meat. Getting the details right remains a challenge, as Brown explains.

“On a scientific side we have to figure out how to recreate the protein structure in meat,” says Brown. “Then we have to replicate that structure and the relationship between moisture and air, proteins, and lipids using all plant matter. Then there’s the cultural challenge, how to get people to accept that this plant-based meat is every bit as tasty, good and as accessible and healthy as animal protein,” says Brown.

Alton Brown of food television fame tasted Beyond Meat’s still-in-beta plant based “beef” protein and declared that it would encourage him to eat more steak, according to Brown. As Brown explains, this was because he could now save his red meat allowance for top quality beef steaks and use the Beyond Meat beef for everything else that called for beef such as tacos or casseroles.

Currently on offer are Beyond Meat’s chicken-free chicken products, available in three different styles. The plant-based beef has yet to be launched.

Brown downplays Beyond Meat’s vegan, gluten-free, non-GMO status in the hope that one day his “fake” chicken will become a choice for mainstream consumers, who may embrace the product for cost reasons and basic health benefits as opposed to ethics.

“Think about clean, plant-based protein,” says Brown. “Think about where your protein is coming from. Why not take plants over animals?”