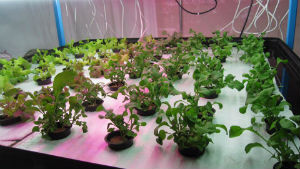 In her first year as a farmer, incessant rain left Katie Phibbs with flooded fields, no crops, and a stack of bills to pay. After this challenging foray into traditional farming, Phibbs decided to try a more creative and less unpredictable approach to farming: hydroponics.

Starting out in her hydroponic venture, Phibbs knew leafy greens were a wise crop choice for
two reasons: they thrive in a hydroponic setting and people can’t get enough of them. However, since starting the farm, Phibbs has expanded her focus beyond just growing and selling lettuce;

Phibbs has become an expert in hydroponic growing systems and has made this expertise a core component of the farm’s business model.

“I started out as a farmer wanting to grow lettuce but along the way I learned to engineer my
own hydroponic growing systems,” Phibbs says. “I became an electrician when I moved indoors
and had to learn artificial lighting. I now know the difference between volts, watts, lumens and
micromoles. I feel like a water quality expert at this point too.”

In addition to their produce, The Lettuce People sell hydroponic systems and kits, growing
supplies, and equipment. They are also looking to educate the public about hydroponics and
urban agriculture by developing programs for school children and prospective hydroponic
farmers and through extensive social media outreach.

“I believe in the importance of sharing what I have learned so that it can become exponentially
better. This is why I’ve recorded and shared my experiments on YouTube and Blogger from the
beginning,” Phibbs says. “I teach classes on how to begin your own hydroponics garden or
business, so I’m an educator and consultant.”

Much of Phibbs’ success as an urban farmer and educator can be attributed to the research she performed as she developed her business model. For example, Phibbs made a point of examining hydroponic business models that failed, so she could make the necessary adjustments to her own. After realizing that one of the primary factors in failed hydroponic operations was the cost of energy usage from lighting and cooling, Phibbs made some energy-savvy changes at The Lettuce People.

“We were able to cut our energy bill by over 60 percent by switching to energy efficient LED’s,”
says Phibbs. “We eliminated thousands of dollars in heating and cooling cost by simply moving
the growing to the basement. Lettuce requires cooler temperatures around 65 to 75 degrees
which most basements can maintain with very little energy inputs.”

“The unit was designed to be easy for the beginning grower, but still useful as a money making
or research tool. The beginning grower can set the pH and nutrients one time at planting and not touch it again until harvest,” says Phibbs. “The experienced grower can utilize our circulating system to grow a variety of different greens, micro greens, and herbs.”

Another factor in Phibbs’ success has been location. Phibbs says she feels very fortunate to live in a city that is beginning to embrace local foods. Because of the blossoming local foods
movement in Youngstown, The Lettuce People have many outlets for their products, including
several area farmers markets, a CSA, a Food Cooperative, and various locally-owned grocers and restaurants. This local foods-friendly environment has helped make The Lettuce People
self-sufficient, with plans of turning a profit in the next 6 to 8 months.

According to Phibbs, the future goals of The Lettuce People relate primarily to education. Phibbs would like to increase the farm’s impact in the Youngstown community by installing salad bars in local schools, hospitals, and nursing homes.

Phibbs believes this simple act could have an extremely positive influence on the people of Youngstown, particularly the children.“I truly believe that if kids play a role in growing their food, they will eat it,” says Phibbs. “With the childhood obesity rates we are facing in America, I think there is a lot of room for improvements in our school lunches. Imagine if the students could grow their own lunches.”