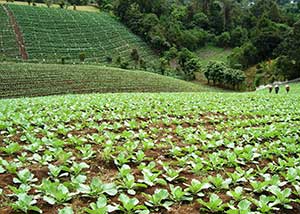 When Casey Houweling traveled to Tactic, Guatemala in the summer of 2012, he saw firsthand the poverty, illiteracy, and hunger faced by the people in a country torn by decades of civil war. Houweling, President and CEO of Houweling’s Tomatoes, made the trip at the behest of his daughter Rebecca, a nursing student who had served there alongside the staff at a school run by Impact Ministries.

Rebecca was convinced that Houweling’s Tomatoes had the resources to help improve life for Tactic’s residents. Houweling had his doubts, however.

“I was expecting a low-tech operation,” says Houweling. “Our own facilities are high-tech—I wondered how can I transfer knowledge from what we do to what they do?’”

Tactic is a remote municipality of about 17,500 people located in the mountains of Guatemala. Houweling spent a week touring the area and was awed both by the beauty of the country and by the challenges of farming on such mountainous terrain. Most farmers still raise their crops by hand, as they have for generations.

Houweling also discovered that most farmers grow mainly corn, beans and little else. Many people, especially children, suffer from hunger and malnutrition because of low crop yields and lack of variety in their diets.

“What really intrigued me,” Houweling says, “was that the climate is great year-round, there is plenty of rain, the soil is rich and volcanic—so why aren’t they growing vegetables?”

Houweling learned that when Guatemalan farmers had attempted to grow other crops, they consistently failed because daily tropical rainstorms washed out the tiny plant seedlings before they could take root. This gave him an idea: why not erect a greenhouse to grow seedlings large enough to handle the daily deluge? The resulting food could feed the population and the greenhouse could educate young farmers. And so the Seeds of Tomorrow project was born.

In the fall of 2012, Houweling’s Tomatoes and Kubo Sustainable Greenhouse Projects committed to erecting a half-acre greenhouse in Tactic. Other suppliers and supporters provided plants, labor, and materials. By July 2013, the greenhouse was in operation, and the community celebrated the project’s completion on September 30, 2013 with a joyous ribbon-cutting ceremony.

Now, crops such as peas, carrots, cabbage, tomatoes, sweet peppers, onions, Swiss chard and green beans grow to a more substantial size under glass before they are planted outside and tended by local farmers. Between 1,350 and 1,400 children eat fresh produce daily at the Impact school in Tactic, and Impact sells the extra produce to help fund their programs.

Houweling notes that the children are not biased towards new foods, which makes introducing non-native vegetables a little easier.

“They’re so very hungry,” he says. “They’ll eat anything. But we’re still trying different varieties, to see what works best in this climate and what people like.”

Better nutrition has also helped the children perform better in school, according to Houweling.

Local farmers working with the project have learned newer, more effective ways of farming, which has increased their yields and their incomes. Several community members have started formal agricultural training so that they can run the greenhouse project themselves. The ultimate goal is for the project to belong to the people of Tactic to be truly sustainable, says Houweling.

“It’s so rewarding,” he says. “You can see the gratitude in the people when you’re there to help them. And they are the ones making it happen themselves.”