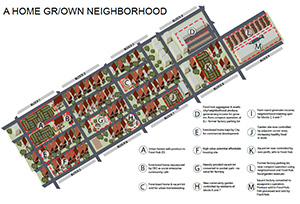 Like many post-industrial towns, Milwaukee, Wisconsin is a community in flux. The city went from 75 foreclosed homes in 2007 to over 1200 foreclosed homes and 2700 vacant lots in 2013. With all of that vacant space, the city is now looking to urban agriculture as a chance to start afresh.

The program seeks to create value in a poor real estate market. “Essentially, we’re tilting the conventional city real estate paradigm, which is to start using some of these properties instead of keeping them,” says McCollow. “Ideally, every vacant home and every vacant lot would be filled with a brand new $200,000 house but that’s probably not going to happen.”

HOME GR/OWN is a threefold initiative that turns unused space into community assets while stimulating the local economy and increasing access to healthy food. Like many urban areas, downtown Milwaukee is considered a food desert, with little affordable access to sustainable, healthy food. By introducing community gardens, urban farms, healthy food stands and green space, McCollow hopes that land ownership as well as local entrepreneurialism will increase in the city.

“Some of the most challenged demographics have had a real hard time really jumping on the economic ladder,” he says. “We have a major issue in Milwaukee, being a major manufacturing capital with globalization, in that we lost about 70,000 manufacturing jobs in the central city over the last decade. The central city has a demographic of primarily African-American men who just can’t get back on the economic ladder.”

The Lindsey Heights area will act as the pilot neighborhood for the program. By collaborating with community partners such as Alice’s Garden, a community garden offering CSA shares and Walnut Way, a local conservation group that is buying abandoned properties and creating urban farm projects, McCollow hopes to build on established momentum. The idea is to give those displaced by the loss of manufacturing a new direction for their communities.

“There are 100,000 people in Milwaukee central city.” explains McCollow. “If we can pluck out and really engage five out of 100 people, that’s an overwhelming number for us.” HOME GR/OWN is still new to the inner city, only beginning in earnest this past July. Initial efforts look promising, according to McCollow.

“We know there’s local demand,” he says. “We know we have local growers. We want to expand local growers, essentially working on a local food supply chain of growing, processing, distributing, and marketing. An outline of the pilot plan shows a sustainable neighborhood that includes gardens, parks, playgrounds, a composting center, farm stands, a food hub and an aquaponics center. The hope is the program will encourage community involvement, stimulate growth, reduce crime, create a local food supply chain, provide better choices for resident and increase a sense of community pride.“

Originally, the city expected the HOME GR/OWN Program to be funded by the Bloomberg Challenge, but despite making it to the finals, Milwaukee missed out on a monetary award. The city will fund the project with city funds while seeking additional sources of capital. By expanding current zoning laws, removing or reducing restrictions on inner city agriculture and aiding locals who want to begin a sustainable business, Milwaukee hopes to enable its residents to embrace the program.

“It’s a big idea where the city is connecting the dots between what is already a very strong urban agriculture community in Milwaukee,” says McCollow. “We want to essentially build on the incredible human capital that we already have working in the urban agriculture area in Milwaukee. I joke our goal is to find funding sources, connect the dots and take these very strong existing local efforts and put them on steroids.”