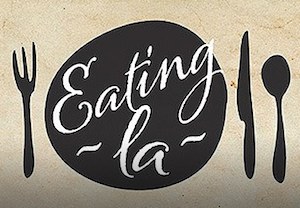 News Release — LOS ANGELES, December 9, 2013 — Prominent food leaders from across the Los Angeles region will gather on December 15 at the inaugural EatingLA Food Fair and Forum to create a plan for a local food system. The spectrum of panelists includes urban gardeners, permaculturists, gleaners, foragers, restauranteurs, chefs, food truck advocates, urban planners and food policy experts. The event will also include a family-friendly holiday artisanal food market with cooking demonstrations and a film screening. The EatingLA Food Fair and Forum will take place on Sunday, December 15, from 12-5PM at the EarthWE Gallery at Bergamot Station in Santa Monica, and is a collaboration between Homemade1616, EarthWE, Project Butterfly, and Rhyzotek.

EatingLA Producer and Forum Moderator Erica Wohldmann says, “The local food movement is growing, with edible food forests sprouting up all over the streets of Los Angeles. The goal of this EatingLA event is to connect the urban farmers, gleaners, foragers and artisanal food makers with consumers, restaurant chefs, food banks, and schools. We see a huge untapped potential here and recent regulatory changes in California make creating a closed-loop food system easier than ever. For example, people are just learning about the new California law, AB1616, which allows anyone to make and sell a variety of homemade foods right from their home kitchens.  AB1616 was one of the catalysts that led us to organize this EatingLA event—our first in a series of events that bring together many of the stakeholders to jumpstart a more focused dialogue on what we can do to transform the way LA eats.”

The holiday food market features some of LA’s finest cottage and artisan food makers. Plus, Chef Gino will offer a live cooking class for kids and the Master Food Preservers will teach attendees how to make preserves at home.

At 5:30PM, EarthWE will be screening the new documentary film, “Growing Cities.” Turning the vision of EatingLA into a reality, La Botte Ristorante in Santa Monica will be offering a special menu with ingredients supplied by LA’s urban farmers and foragers.

“EarthWE is very excited to host this event,” adds Co-Producer Robert Mozejewski of EarthWe Gallery, “This represents the latest chapter in EarthWE’s mission to promote local non-profits and change-makers. We’re also pleased to be able to screen the new documentary about urban farming, ‘Growing Cities.’”

The Forum and screening will take place inside the EarthWE Gallery. Entrance to the event is free (donations are welcome), but requires RSVP due to limited seating. To RSVP and for full details go to: