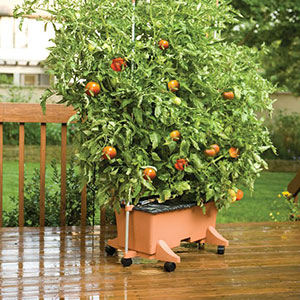 In 1994, Mickey Lynch was working on a project in Florida to turn waste products from landfills into usable materials. This project brought him into contact with many farmers, including Blake Whisenant, who had recently lost a large tomato crop due to flooding and was developing a raised system to protect the crop and offer more control over the growing environment. The pair began a collaboration that resulted in EarthBox, a container farming system that reduces waste and takes the guesswork out of farming.

Frank DiPaolo, general manager of EarthBox, credits much of the success of the product over the years to its simplicity. Water is reserved at the bottom of the container. Layered over the water is an aeration screen, which prevents root rot and mold, and over that is a peat-based growing media, which draws up the water as it is needed. The EarthBox also works with a fertilizer strip and a mulch cover, which prevents weeds and conserves water. The system requires about a third of the water and half of the fertilizer as in-ground methods, according to DiPaolo.

The company’s original mission was to design a system for commercial growers.

“Early on, we were really just focused on making containers to maximize the yield that we were getting in a commercial setting,” says DiPaolo. “Earthbox really started as a better way to grow tomatoes commercially.”

As word got out about EarthBox for commercial use, more and more home gardeners told the team that they would love to have a box for their own personal use.

“The light bulb went off then that maybe this wasn’t just a commercial product,” says DiPaolo.

Commercial growers do make up a portion of the customer base, and in the future DiPaolo hopes they will continue to grow that revenue stream. At the moment, however, he believes the company may be a bit ahead of the curve and may need to wait for economic and environmental conditions to change before it makes financial sense for many commercial growers to invest in EarthBox systems.

These days, most of EarthBox’s customers are home gardeners. Many tend to be older and transitioning into container gardening, either because they’ve moved away from a house with a yard or because they can no longer physically care for an in-ground garden.

“When people grow up having a garden, and you give them a tool that allows them to continue that hobby with very little effort, it makes for an interesting business,” says DiPaolo. “It’s been a lot of fun to see people embrace the product because it takes them back to something they really got a lot of pleasure out of and maybe have gotten away from due to time constraints or physical limitations.”

Educating people on how to grow their own food was a mission of EarthBox from early on, and the company expanded on that idea by developing a K–12 standards-based curriculum.

“You can teach kids math and reading and science, while behind that they’re learning how to grow food,” says DiPaolo. “It’s a learning tool that helps them to understand how to grow food without focusing on growing food. We see that most kids aren’t clamoring to the table to eat their vegetables, but when they put that effort in to growing their own tomatoes and zucchini, they can’t wait to take those vegetables home to their parents and try them out.”

Another early goal was working with charitable organizations to get EarthBox into parts of the world stricken with drought, or otherwise without an adequate agricultural system. DiPaolo says the company will continue to work with the governments and organizations in these areas and educate  them on how to use EarthBox to help people grow their own food.

“Taking the strain off the agricultural system, we feel, is important today and is just going to become more important in the future,” says DiPaolo. “We can use tools like the EarthBox to protect the environment, improve yields and use land that really isn’t good for anything else. You can have a garden anywhere as long as you can get an EarthBox and water there.”