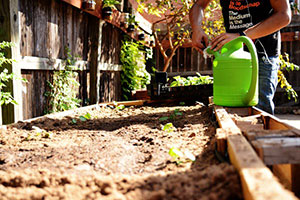 While many large cities are successfully implementing urban agriculture initiatives, smaller towns often lack the knowledge, direction and financial resources they need to get started. The Distributed Urban Farming Initiative aims to remedy this issue.

The program was launched in 2012 by community tourism and development firm Advent GX to help spur economic and community development in the small, historic town of Bryan, Texas. The program seeks to achieve this goal by converting vacant space into urban farms and gardens, operating in partnership with the Downtown Bryan Association.

Bryan, Texas is a city of 76,000 situated just north of College Station, Texas, the home of Texas A&M University. AdventGX, a spin-off of Texas A&M, also operates Innovation Underground, a small business incubator, in downtown Bryan. The incubator was launched in 2011.

The urban agriculture program seeks to leverage small business entrepreneurship by engaging small business owners in maintaining the gardens throughout downtown to both preserve the historic character of town while sparking new business opportunities and strengthening connections between community members and their food.

“We are working in partnership with the city to convert vacant and underutilized areas into spaces for education and public participation,” says project coordinator Ruthie Strout.

The program’s stated mission is to “reintroduce to our communities the notion of homegrown food; what it looks like, how it is grown, and how to incorporate it into our diet in order to live healthy lives.”

The initiative also hopes to encourage growth in local commerce by providing produce to area restaurants and creating space for community events. By coordinating a network of urban farms and gardens distributed through downtown, the program seeks to unite agriculture with community development, nutrition, and local economic development in Bryan and, eventually other smaller cities and towns. Strout says that the end goal of the project is not to build gardens solely in downtown Bryan, but rather to use local agriculture to meet widespread need in communities across the country.

“It is our intent to develop, implement and promote a sustainable downtown business model that will be available to communities that would otherwise lack the means or direction to execute urban farming,” says Strout.

Nutrition education is also a primary component of the Distributed Urban Farming Initiative’s model. The initiative plans to keep its gardens open to schools and community organizations so they can act as centers for hands-on nutrition education. Ideally, the program hopes to make the gardens in Bryan a “living classroom” for communities in Texas and across the world.

The Distributed Urban Farming Initiative uses sustainable practices whenever possible, according to Strout.

As the program expands, Strout hopes to use solar energy to power garden infrastructure.

Funding for the program comes primarily through educational programs and through venue rentals. The initiative rents out its garden space for birthdays, graduation parties, engagement parties, wedding receptions, and “Enchanted Garden”-themed parties. All proceeds from these events are used to support the urban farming program. The long-term plan includes generating revenue by selling some of the produce to local restaurants and grocery stores.

According to Strout, the realization of this goal and the expansion of sustainable agriculture as a whole are imperative to the world’s future.

“I believe everyone should be involved in agriculture in some way, urban or not,” says Strout. “Agriculture is central to life. Having a healthy understanding of our food system is part of being a responsible member of society.”