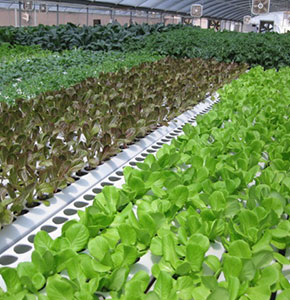 Not many hydroponic farms are established in the middle of an orchid nursery, but for South Coast Orchids’ owner Dennis Keany and his family, hydroponic vegetables were the answer to the question: what do you grow when you can’t use much water?

In Southern California, water is a precious, highly regulated resource. According to Sundial Farm manager Sean Keany, state regulations began changing about ten years ago to conserve the area’s aqueduct-fed water source. Water conservation and access to fresh, clean produce are Keany family values and when the state advised going hydroponic, the decades-old orchid farmers were ready to move forward.

While the family now uses 60-70 percent less water to grow their Phalaenopsis orchid, they stopped growing other plants like Cymbidium that require excessive overhead watering.

The benefits of sustainably grown hydroponics are plentiful, according to Keany, who notes that 80 percent less water is needed to grow food hydroponically than what is needed for traditional soil farming.

“The plants drink all the water we use,” he says.

The hydroponic system circulates an oxygenated mineral solution, which is absorbed directly by the bare-root plants. Since soil is not used in this process, topsoil erosion and depletion of soil nutrients are avoided, as is the environmental impact of fertilizers and pesticides returning to the ecosystem.

In addition, orchids require gas-heated greenhouses and constant warmth, while the vegetables don’t mind the cold.

“With most of our greenhouses located in a cooler valley, we still heat the water, but it requires much less energy to keep the water temperature constant then the air,” says Keany.

The result is produce grown in a pest-free, toxin-free, nutrient-rich environment. Add a higher crop yield per square foot, and it’s easy to see why the move from growing overhead-watered orchids to root-fed hydroponic vegetables is a sound one from a sustainability perspective.

But making that move wasn’t easy. Sundial Farm is a labor of love that evolved over several years of research and experimentation, says Keany.

“I read every book, made frequent trips to The Home Depot, and sought out information -sharing in an industry where knowledge is often kept close to the chest,” says Keany.

“Hydroponics can be expensive to set up on your own, and it takes a few seasons to figure out your weather extremes. I would dig holes, buy heaters and chillers, plumb a whole system, plant the seeds and wait weeks to months to see the outcome. Then I’d try again. I ended up building about ten trial-and-error systems in different greenhouses to get it right, and we still make drastic changes to the set up we have now.”

Having learned the ropes on a 100-square foot system, Sundial Farm now produces hydroponic vegetables in greenhouses occupying over 40,000-square-feet with three large reservoirs that hold on average of 1,750 gallons each. Their greens, tomatoes, and cucumbers supply four farmers’ markets per week, as well as a couple of CSAs, small local stores, and the family itself.

“We like that we can eat what we grow,” Keany says.

Sundial Farm has been selling its produce for three years and is making a profit.

“Farmers markets are great,” says Keany. “When you sell right to the end user in a small entrepreneurial setting, you can explain what you’re doing as you’re selling. And you can make more money selling less when you’re really small.”

Slow growth is the goal for Sundial Farm, which will eventually switch the entire orchid operation into a hydroponic farm.

“We’re working as we’re growing,” explains Keany. “Just like how a plant grows: it sleeps, creeps, and leaps.”