Organic Farm Beats the Odds and the Weather off Coastal Maine 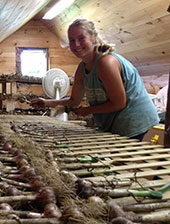 Running a farm off the coast of Maine presents unique challenges: the growing season is short, labor expensive, and pests are a big problem. But Sara Hodges and John Wright, managers of Sparkplug Farms on Vinalhaven Island, are already turning a small profit and looking to expand in their second year.

If they do expand, they will need to hire additional help, but seasonal labor in lobster country can get expensive. Raccoons and deer took about 50 chickens this year. Supplies have to come in by ferry, which increases the cost about 10 percent. And then there’s the fog, which can cause mildew damage to crops.

Neither Hodges nor Wright are Maine natives—both grew up in New Hampshire—but a farm apprenticeship through the Maine Organic Farmers and Gardeners Association drew them to the Pine Tree state.

After their apprenticeship, the pair had an opportunity to lease 30 acres of land at a very reasonable rate on the island, so they decided to try out running their own farm for a year. It went well, and they’ve just completed their second year of operation and a five-year business plan.

Part of the reason Wright says they were able to turn a profit and reinvest in their business so soon was this inexpensive lease, but eventually they’ll need a permanent home. They’re currently working to determine how to afford the mortgage on a perennial home on the island should something become available, but land on the island is more expensive than on the mainland.

One condition of their current lease is that the land be farmed organically. Although Sparkplug Farm is not certified organic, Wright says the expensive certification is not necessary to please his customers, who expect organically grown produce.

“The population knows us really well and they know we follow all organic standards, so we haven’t really found a need to get certified,” Wright explained, adding that they keep their customers informed on what practices they’re using through their Facebook page and face-to-face conversations.

“Our carrots may not look pretty, but when you taste them it’s much better quality,” he says.

Beyond organic practices, Hodges and Wright are committed to minimizing their impact on the environment by rotating grazing pasture and controlling fertilizer use to avoid runoff into the waterfront abutting the property.

Sparkplug Farm runs a summer and fall CSA program, a farmers’ market stand, and sells to downtown businesses. Distributing through multiple venues works well with the overlap of the growing season and the summer tourist season, when the population of Vinalhaven swells from 1,000 to 5,000.

To keep their customers interested, Sparkplug Farm offers a diverse variety of produce, including artichokes, salad mix, kale and potatoes. Wright says their seed orders include over a hundred different varieties.

Hodges and Wright are also hoping to establish a micro-dairy, and their cows produce milk most of the year. Fortunately, the tight knit community has brought them together with the owner of a small goat dairy, who has agreed to buy the extra milk in the off season.

“With the summer market we have about two or three months when we can sell pretty much anything, but if you’re milking a cow for eight months, you’re looking at a lot of extra milk kicking around. Working with another dairy out here that’s making cheese has motivated us to go into it,” says Wright.

Sparkplug Farm is known for their excellent salad greens, and Wright says it’s most important for fledging farmers to focus on the quality of their product, even if it means charging a little extra.

“Having really top quality salad mixes has really driven our business and allowed us to succeed,” he says. “Even though our prices may be a little higher, having the top quality product of what you can find out here has really made us into a viable business.”