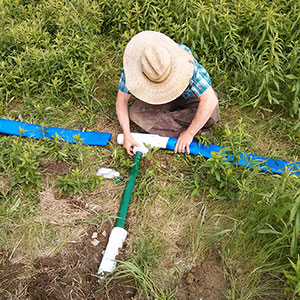 Just Food,  a Canadian organization dedicated to supporting a sustainable agriculture system in the Ottawa region, is offering a sandbox of sorts for those interested in organic farming. The program gives would-be farmers an opportunity to try out their business models without assuming all the risk of heavy start-up costs.

Through their work with farmers through CSAs and training programs over the years, Just Food staff noticed a shift in the types of people interested in breaking into organic farming. This new type of farmer, typically someone new to the area or someone wanting to turn farming from a hobby into a career, often has aspiration and some relevant skills, but little access to the large-scale infrastructure of farming such as land and equipment.

“The land access issue is a real barrier for them: how to get a parcel of land when you just want something to start up that’s not a really big investment, and then how to get the skills and training to successfully run a farm business,” says Leela Ramachandran, manager of Just Food’s farm programs. She said buying land and capital infrastructure in the Ottawa region could cost hundreds of thousands of dollars.

To bridge this gap, Just Food launched a Start-Up Farm program in 2013 to loan land and infrastructure to aspiring organic farmers. Up to ten teams, called “test-croppers,” are selected each year to participate. The teams can test their ideas and build up a customer base before moving on to their own land. Each team may renew their loan for up to three years, starting with a quarter-acre of land with the opportunity to gradually expand to an entire acre by the third year.

The Ontario Trillium Foundation, a philanthropic branch of the provincial government, is providing Just Food with seed money for the first three years of the program to cover capital costs, allowing the program to charge its test-croppers heavily subsidized fees. After this grant ends, the organization hopes to work on a cost-recovery basis.

Although Just Food does work with a range of producers in its other programs, the Start-Up Farm program is focused on organic growers, and Just Food farm is in the process of obtaining organic certification.

“That was partly in response to the increase in demand for local and organic food in our region and partly because we want to be able to showcase organic methods as viable for production,” Ramachandran explained.

Just Food rents about 120 acres from the Canadian government in Ottawa’s greenbelt, just on the edge of the city limits. However, only five of these acres were cultivatable in the program’s inaugural year. Ramachandran hopes they can continue to restore the site, double the cultivatable acreage in 2014, and continue to grow from there.

Despite some initial obstacles, including a cold wet spring and drainage and soil challenges, Ramachandran feels the first year went very well, and most of the teams have signed up again for next year.

“I was really impressed with how the group handled a lot of unexpected challenges and stayed really resourceful and positive throughout the season,” she says.

Although the program’s goals are to graduate test-croppers who transition onto their own land (in fact, one test-cropper from 2013 is already doing just that), Just Food also considers the program successful when test-croppers decide that their business model may not work out after all, because the test-cropper had the opportunity to make an informed decision about that career path without investing significant capital.

“People are able to have that learning experience and come to that decision about their career without taking on a lot of debt,” Ramachandran explains. “We see it as kind of a business incubator for new farmers, where they can test out ideas and make more informed decisions about their career paths and their businesses.”

Ramachandran expects most of the produce from the Just Food farm and its graduates will be sold on the local market, so than in addition to creating more sustainable farmers in the region, the program will indirectly create more buyers of sustainable local food.

“People who buy their food locally have a relationship with their farmer and understand the work that goes into growing the food, rather than when you just go to the superstore and buy something that was produced who knows where,” says Ramachandran.