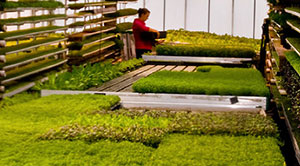 Living Water Farms in Strawn, Illinois is a family affair. Denise Kilgus established the hydroponic farm with her husband Kevin and their daughter and son-in-law, Natalie and Mark Schneider, in April of 2008.

Before the Kilguses founded the farm, the couple had practiced large-scale gardening for over 28 years in central Illinois. When the family started gardening, they grew only enough food for themselves. But as the years went by, they began growing on a larger scale and founded The Stewards of the Land, LLC, a local organization to help promote sustainably grown, local produce in Chicago.

“We worked together with other local gardeners to take our products to Chicago restaurants,” Denise Kilgus says. “Knowing the need for locally grown foods was part of what sparked the idea.”

At first, their greenhouse systems were not automated. “There was a lot of manual labor,” Kilgus says. But since the farm’s inception, the farmers have become more tech-savvy, now using nutrient film technology in their greenhouses.

“The closed-loop watering system minimizes the amount of water needed to produce greens,” Kilgus says. “Water is re-captured, cleansed and re-used. Our greenhouse environment is monitored and controlled by a Growers Choice computerized system.”

The farmers use other sustainable growing and operating methods.

“We use geothermal for heating and cooling our water, a compostable grow medium, and we pick up used oil from our chefs that is then converted into biodiesel fuel,” Kilgus says. The farm also uses a fogging system for pest and disease control.

“As with any start-up business, there is a learning curve to get through,” Kilgus says. “We have learned a lot in the past five years. Some of the knowledge has come from mentors and consultants, and some from the school of hard knocks.”

And luckily, the Illinois marketplace is loaded with consumers who want local and sustainably grown produce, according to Kilgus. The farm also receives a lot of interest and foot traffic from people who want to learn about hydroponics.

While in its early stages Living Water Farms grew a greater variety of produce, the farmers discovered it was more efficient and productive to focus on growing a select number of products.

“We had a larger variety of products that we were growing besides lettuces such as tomatoes, cucumbers, and green beans,” Kilgus says. “We tried out edible flowers and herbs, too.”

Although the farm is not certified organic, the farmers have found that chefs they sell to are satisfied with the direct connection to the farm and its growing practices.

Over the past few years, the farm has added a third 23 x 132-foot greenhouse to create a larger growing area as well as a 50 x 100-foot pole barn, which houses the farm’s offices, a packing room, a germination room, a walk-in cooler and storage area.

“We have also branched out into another location in Urbana, where we grow mung bean sprouts, wheatgrass and sunflower shoots under a new business called MidWest Fresh,” Kilgus says. “Expansion is possible and will be pursued as the market demands.”

When asked if she had any advice for prospective hydroponic farmers, Kilgus said it’s essential for new farmers to do their homework and to know their markets and growing systems. Also, above all: start small.