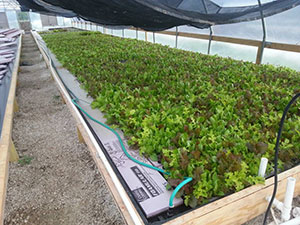 Success has come fast for Beverly and Dave McConnell of Utterback Farms in Middletown, Missouri. Almost overnight, the couple has established an aquaponic farm and are just months away from making a profit.

The McConnells inherited the farm, which was established at the turn of the last century, from Beverly McConnell’s parents. It was Beverly’s avid gardening hobby, inherited from her Depression-era grandmother, which led the couple to enter the world of commercial growing in their retirement.

In 2011, the McConnells began hydroponic farming, but determined that costs of production far outweighed slim profit margins. The McConnells did more research and took an aquaponics training class, but found the information not helpful for their geography.

“Most people teaching aquaponics are in a tropical-type surrounding, and don’t have the weather issues that we have,” says McConnell. Most of the McConnells’ knowledge has come from trial and error. McConnell custom builds the systems.

“For a deep water system, a person could expect to pay $12.50 per square foot to have somebody do it for you,” says McConnell. “You can do it for half of that if you do it yourself.”

“We went with Bibb lettuce as that is the fastest turnaround,” says McConnell. “When you’re trying to get a business started, you need income weekly.”

According to McConnell, deep water systems with leafy greens is the most cost-effective way to approach small-scale aquaponic farming. Raising tilapia in the closed system produces fish waste to provide nutrients for the leafy greens and herbs.

The produce is sold mostly to local stores. With an established label and containers, the couple harvest and pack their produce on-site for standing orders, offloading surplus at the regional farmer’s markets.

Although the aquaponic setup is a completely organic operation, McConnell decided to forgo official organic designation as a cost-cutting measure, finding “chemical-free” and “local” worked just as well for branding. Utterback Farms sells within approximately 75 miles of the operation.

“Locally-grown is the hot button,” says McConnell. “It’s even hotter than chemical-free. People like to put a name and a face to the people they are buying from.”

The farm raises only a hundred or so fish a month. McConnell estimates it would cost approximately $15,000 in certification, licensing and equipment expansion to net $4,000 in fish sales annually. The farm is currently in negotiations with a regional Asian grocer that prefers fresh, whole tilapia for their customers. Selling the fish whole avoids the cost of installing a dressing operation on the farm.

Profitability can come quickly in an aquaponic operation, according to McConnell.

“We started less than a year ago, so we feel very pleased that over a 15-month period of time, we are nearly profitable. That’s a pretty fast return on investment,” says McConnell. The McConnells have two new greenhouses slated for construction this fall and are striving to make use of alternative energy by implementing a geothermal system to facilitate year-round growing for their cool-weather crops.

McConnell predicts aquaponics will take off in both the domestic and commercial arenas.

“In the next five years you are going to see just an explosion in aquaponics, because if people are raising their own food they can save money,” says McConnell.