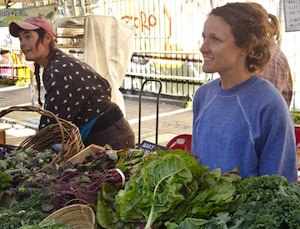 What was once a vacant lot in the heart of San Francisco is now a 3/4-acre urban farm bridging the gap between production and consumption.

Galloway’s fellow co-founder Brooke Budner first decided to start an urban garden in 2007 after spotting an overgrown abandoned lot from her rooftop. By the time Galloway and Budner met in 2008, Budner had already created a thriving garden on the spot. The two women began gardening together and eventually developed the vision and business plan for Little City Gardens.

In spring of 2010, they moved to their current location, which at the time was a privately owned vacant lot. Galloway and Budner saw great potential in this particular lot because it had the right sun exposure and was the site of a former creek bed. After some negotiation with the lot’s owner, they successfully secured a lease for the land.

Galloway and Budner started Little City Gardens largely as an experiment in urban farming. They wanted to see if it was possible to make a living as an urban farmer in the United States and what it would take to do so.

They have tried a variety of distribution models including CSA, a farm stand, and selling direct to caterers and restaurants. Most recently, they have focused entirely on restaurant distribution with a goal of reinstating the CSA in the near future.

“Restaurants are an efficient and successful outlet for us, and we are lucky to have great relationships with the restaurants we work with,” said Galloway. “We hope to branch back out a bit again next year, bringing back a small CSA.”

The farm implements sustainable agriculture practices such as cover cropping, heavy mulching of perennials and the use of natural inputs like manure and compost. They have struggled with finding efficient ways to bring in necessary materials because of limited space and driveway access, says Galloway.

The farm’s primary challenge relates to land tenure. The original owner has sold the land the farm is currently leasing to a developer, who is in the process of drafting plans for the lot. As a result, Little City Gardens is operating on a month-to-month lease. “Running a successful, financially sound business has been particularly challenging without a reliable long term lease,” says Galloway. “It has greatly limited the kind of investment we can safely make.”

Insecure land tenure has been a major problem not only for Galloway, but also for small-scale urban farmers across the country. To address this issue, the state of California took action on the issue with recent passage of the Urban Agriculture Incentive Zones Act, which provides tax breaks to landowners who lease their land to urban farmers.

According to Galloway, Little City Gardens has not yet felt the benefits of the legislation as San Francisco is still in the preliminary stages of implementing it. She notes that the owner of their current property is not interested in taking advantage of the legislation, but aims to put the property on the market.

Galloway recognizes the larger implications the legislation will have for Little City Gardens and other urban farms in the state.

“I think the recent legislation suggests a shift in our perceptions of what constitutes ‘value’ on a piece of land,” said Galloway. “The official recognition that the value that comes from soil health, community engagement, and food awareness is, in some cases, as important as real estate value is a step in the right direction.”

Although Galloway and Budner believe it is too soon to tell whether or not their experiment in urban farming has been successful, they have been able to make a modest living for themselves as urban farmers while simultaneously educating the San Francisco community on important food issues.

“While we won’t feed entire cities with food produced on urban farms, I think urban farming is an incredibly valuable contribution to dialogue within cities, and hope it won’t be such a novel idea forever,” she said.