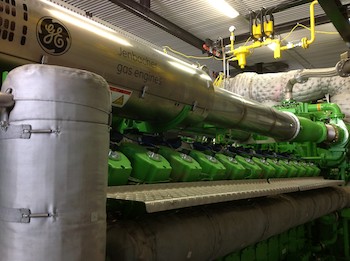 News Release – Since officially unveiling an 8.8 megawatt Combined Heat and Power (CHP) onsite energy project in August 2012, Houweling’s Tomatoes of Camarillo, CA has increased its onsite power generation capacity to 13.2 megawatts. As of November 1st, Houweling’s will be the first CHP installation to meet the requirements for participation in California Assembly Bill 1613.

AB 1613, began with a 2005 California Energy Commission (CEC) study investigating the CHP market and policy options for increased penetration in California. The result was the 2007 Waste Heat and Carbon Emissions Reduction Act, commonly referred to as AB 1613. This program operates under strict criteria designed to reduce waste energy, meet a minimum efficiency of 60%, and reach NOx emissions of no more than 0.07 pounds per megawatt-hour. Ultimately it provides qualifying projects a favorable Power Purchase Agreement (PPA) with the state utilities.

“There has been no shortage of red tape to cut, reams of paperwork to navigate and countless meetings to get us to this stage,” comments Casey Houweling, CEO of Houweling’s Tomatoes. “While it hasn’t been easy, today we are operating a 13.2MW installation that significantly reduces our environmental impact, while increasing our ability to grow and harvest year-round, locally grown, California tomatoes.”

Houweling notes; “We made the decision to move forward with the first USA Greenhouse Farm CHP installation, without the certainty of a power purchase agreement. It was a huge risk, but at the end of the day, I believe in this technology and know it was the right thing to do.”

Not only does Houweling’s produce electrical energy, they are uniquely suited for CHP as waste heat is captured and utilized for heating the greenhouse at night, while CO2 exhaust is captured and utilized for plant fertilization. Alongside other sustainability projects implemented by Houweling’s, this project increases the company’s ability to provide year-round local produce in southern California

In conclusion, Houweling reflects; “While the project most definitely wasn’t without challenges, I have to take a moment to thank our team at Houweling’s, and our partners on this project including Southern California Edison, Western Energy, GE Distributed Power, and Southern California Gas.”