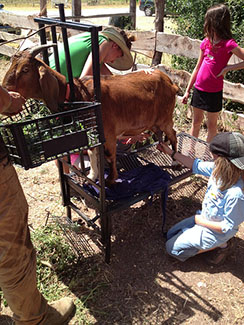 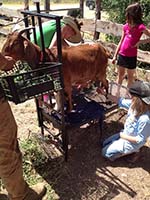 Prillaman and Randall see agriculture not as an efficiency and profit-maximizing endeavor, but as an intricate process guided by natural cycles, ethical responsibility, and community enrichment, and work hard to maintain a farm that realizes their vision of what agriculture should be.

That being said, these young, new farm owners have been tremendously successful for a first-year start-up.

Thus far, the pair runs a thriving CSA which currently has a wait-list for next season, sells to a popular local restaurant, has tables at two farmer’s markets, and has received accolades from established farmers who are impressed and astonished with their first year success.

Prillaman would be the first to admit that the support of his family has been integral to his ability to live out his agricultural dream.

“My parents and grandmothers have been stalwart and die-hard supporters of what Leslie and I are trying to do and there have been times when their willingness to put up financial capital has enabled us to move into a new phase or keep a phase going,” says Prillaman.

Like many beginning farmers, Prillaman and Randall have found securing capital to be the most challenging aspect of their new endeavor, so they are incredibly grateful to have family support to help keep them doing what they love.

Another crucial component of Prillaman and Randall’s success is previous internship experiences. Both Randall and Prillaman lived the farming life first-hand before committing to their own venture. Randall sees internships as a critical step on the road to becoming a farmer.

“There is no other way to see if you like it,” he says.

While studying abroad in New Zealand, Randall was inspired by the country’s progressive small-farm movement and later pursued an internship after graduation at a small CSA farm in Vancouver, British Columbia.

“It’s hard work and you’ve got to love doing it, but I definitely do,” says Randall.

Prillaman took an apprenticeship at a farm near Berryville, Virginia called Smith Meadows. Smith Meadows is the family farm of Forrest Pritchard, a professional farmer, writer, and small-farm advocate who recently published the book Gaining Ground: A Story of Farmer’s Markets, Local Food, and Saving the Family Farm. Prillaman went into his internship feeling uncertain about his commitment to agriculture, but he left with a newfound passion for and understanding of the sustainable agriculture movement.

“Not only was I learning about how to raise livestock this particular way, but learned a lot more about our whole food economy,” said Prillaman, “We spent a lot of time each day talking about what it was we were doing and why it was important.”

Pritchard instilled in Prillaman another trademark characteristic of Green Gate Farm’s success: a commitment to sustainability.

“Our idea of sustainability is a smaller carbon footprint,” says Prillaman. “The farm can take care of itself both in terms of the animals fed and raised naturally paying the people working here.”

In order to achieve sustainability at Green Gate, Prillaman and Randall practice rotational grazing and crop rotation to prevent overuse of the land and soil depletion. Prillaman is also very interested in implementing draft power to decrease their use of petroleum.

“The idea is basically look at nature and how she has built a sustainable ecosystem and then how can we re-create that on a smaller scale,” said Prillaman. On the produce side of things, Randall is ardent about organic pest control, and relies mainly on neem oil and beneficial insects like ladybugs and parasitic wasps for any pest problems.

Prillaman and Randall are whole-heartedly committed to the quality of their products. Whether sending their hogs to the highest quality and most humane butcher or providing their customers with the most diverse, nutrient-rich produce selection possible, they invest all of their time, energy, and resources to make it happen. This fall they are providing their customers with an array of fresh produce including head lettuce, mustard greens, arugula, kale, collards, beets, turnips, radishes, and fennel.

Prillaman and Randall also believe that community engagement is an important component of any farm, but especially a CSA. To promote sense of connection between the farm and its members, they host “farm days” in which members are invited to the farm for a tour, potluck, and bonfire. Next year they hope to increase the number of opportunities members have to visit the farm.

“We want people to see what we’re doing,” said Randall, “I think it’s important to be a part of a CSA and to visit the farm.”

Additionally, Prillaman hopes to create an educational component to the farm in years to come, allowing local kids to get first-hand farm experience. He also hopes to eventually start an apprenticeship program like the ones Randall and he participated in.

Looking ahead, Randall and Prillaman are optimistic about the future of small farming and are eager to share their growing base of knowledge with young would-be farmers.

“I think that we’ve hit it at just the right time for young people wanting to get into [sustainable farming] but I don’t think that’s a short-lived period,” said Prillaman, “I think we’re going to see a lot more growth in this field.”