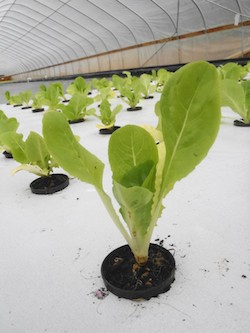 Although Hittner realizes aquaponic farming is not a “silver bullet,” she and Hasey do see it as an integral part of our agricultural future. In a world of scarce resources, aquaponic farming conserves natural resources like water while still producing a greater food output, says Hittner. As a result, Hittner sees aquaponics as a way to close the hunger gap and preserve resources for future generations.

The Farming Fish’s aquaponic system is a custom system designed, sourced and constructed by Hasey from scratch. Before starting The Farming Fish Hasey had a long-time passion for all things aquatic and for working with aquatic ecosystems. By the time he and Hittner started the farm Hasey had gained extensive experience in pond and lake management, skills which translated well to the new endeavor.

According to Hittner, the design and construction of each aquaponic system is entirely dependent upon the intent for which it is built. At The Farming Fish, the intent was to produce a high-quality system capable of producing large amounts of quality food at a reasonable price while remaining economically sustainable.

“Nothing in our system is cheap, but most of it was inexpensive,” said Hittner. “We used all food grade materials as it is a food production system, but reused existing materials and sourced readily available materials as much as possible.”

Economic and environmental sustainability are core components of philosophy at The Farming Fish.

“For a small farm to be truly sustainable, it not only needs to be self-sufficient ecologically, but economically as well,” said Hittner, noting that the primary benefit of aquaponics is that it requires less land, less water and less energy than conventional agriculture, which reduces costs and results in a small ecological footprint.

Hittner and Hasey implement an extensive list of sustainable practices to make The Farming Fish as ecologically sound as possible, such as using beneficial insects and carnivorous plants to handle pest problems, piling compost outside of their greenhouse to heat it in the winter, composting all possible organic matter, cover cropping and subscribing to the motto “repair not replace.”

The Farming Fish produces a plethora of organic products including fish, aquaponic vegetables, earth grown vegetables, herbs, fruits, nuts, eggs and some livestock. The products are sold at local farmer’s markets, to local grocery stores and restaurants, and to regional distributors.

Despite the farm’s success, Hittner is well aware that farming is a “rollercoaster of challenges.” She finds it especially challenging to be a little fish in a big pond, so to speak.

“It’s hard for a small farm to compete in a big business like food, especially in the first few years when making mistakes and learning the hard way,” said Hittner. But ultimately she feels that each challenge they face only makes them more connected to the farm and the community.

In the future, Hittner says they hope to move The Farming Fish toward a goal of complete sustainability and efficiency.

“We are working diligently to refine our energy consumption and move our farm off the grid; we are also pioneering practices that allow our farm to be as truly self-sufficient as possible,” she says.

Hittner finds magic and inspiration in the natural systems mimicked on her farm, but recognizes that this magic doesn’t necessarily make the agricultural life an idyllic one.

“It is all very romantic,” said Hittner. “But at the beginning and end of every day, the aches in our bodies remind us that we didn’t do this because it was going to be easy, we did it because we believe if we work hard enough to propel this practice it can become a hugely beneficial part of our food system and in turn help to heal natural ecosystems.”