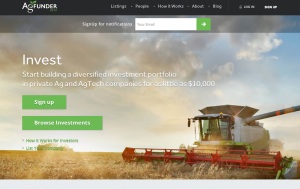 AgFunder opens ag investment to the crowd with beta launch of a new equity crowdfunding platform.

Sustainable agriculture entrepreneurs have a new fundraising option. AgFunder, an equity crowdfunding platform launched its beta site on Sept. 23, the same day that the Securities and Exchange Commission lifted an 80-year old ban on general advertising and soliciting for private investments.

AgFunder combines the business, scientific and agronomist acumen of its three founders to create a true crowdinvesting platform for agriculture startups. For each project listed on the site, AgFunder creates a fund, which in turn holds a stake in the project. This differs from the crowdfunding model of sites such as Kickstarter and IndieGoGo, as investors actually own a piece of the project instead of just preordering a product or making a donation to a worthy effort. AgFunder makes money by charging a listing fee to each project, and by taking a cut of the profits paid to investors.

AgFunder’s beta site currently lists TerViva BioEnergy, an Oakland, CA-based sustainable bio-fuels startup. TerViva was incubated through the entrepreneur support organization Village Capital in 2010 and has subsequently raised $4 million in follow-on funding.  The company has developed a biodiesel feedstock, Pongamia, which is able to grow on marginal farmland where food crops cannot thrive.  Based on a seed native to India, Pongamia is an efficient source of biofuel, with an oil yield eight times that of soybeans. With 100 acres planted in pilot projects at present, the company plans its first large scale project of 2,000 acres in 2014 and is targeting 20,000 planted acres by 2016.

AgFunder is also looking to raise funding for its own operations through the site, and has been benchmarking itself against other sector-based crowdfunding sites, such as consumer goods-focused CircleUp – backed by Starbuck’s CEO Howard Schultz – and technology-based FundersClub.  The latter raised a $1.1 million fund to work with top accelerator programs in June, and sees the sustainable agriculture platform moving in the same direction.

“We’ve opened discussions with some of the new agriculture accelerator programs as we see them as providing projects for our site,” says Leclerc.

Leclerc is also in discussions with some larger private equity and venture capital firms.

“Many of them recognize that crowdfunding is the future, and are excited to work with a platform that not only understands agriculture, but can bring co-investors to their projects” he says.

AgFunder recognizes that conquering the marketing of the site is as vital to the company’s success as mastering the financial requirements.

With nearly 12,000 Facebook followers, building a social media presence has been key to the successful beta launch, and the website has seen around 400 visitors a day, 20 of whom sign up to the platform, according to Leclerc.

The “sweet spot” for AgFunder is companies looking to raise between $500,000 and $2 million, particularly in ag technology and robotics.  Over time, Leclerc expects to add international and farmland projects the platform and some are likely to be larger.  The company has been approached to list farmland in parcels of $20 million to $125 million, but views these deals as too large for the time being.  “We’d probably do a $3 million deal as part of a larger syndicate” he says “but that’s as far as it goes for the moment,” says Leclrec.

AgFunder is among a handful of sustainable agriculture crowdfunding platforms to launch, and – with crowdfunding being such a new concept – there’s little consensus on what the new sites will mean for both startups and investors. Adam Chapnick of crowdfunding major, IndieGoGo, will be joining us at next month’s Seedstock 2nd Annual Sustainable Agriculture Innovation Conference to discuss the rising importance of the sustainable food and agriculture sector for his company.