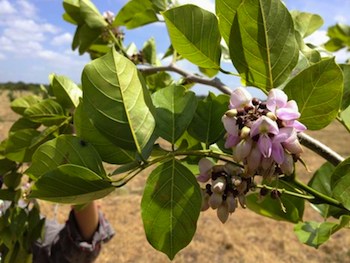 The oil from the seed of the Pongamia tree can be used in industrial applications like biodiesel and sprays, while the protein-rich seedcake can be used in the manufacture of animal feed. Photo Credit: TerViva.

To meet world food demand in the future, agriculture productivity must increase by a factor of 1-2% per year, more than doubling total output by 2050, according to the Global Harvest Initiative’s 2012 GAP Index report. At the same time, global demand for biofuels is projected to increase by 133% by the year 2020, according to Hart Energy’s Global Biofuels Outlook Report.

Intensification of unsustainable agricultural practices to meet these competing needs often harms soil, causing nutrient depletion, erosion, salinization, and chemical, and allows the introduction of crop pests. The result: significant amounts of land are removed from production indefinitely every year. The Food and Agriculture Organization of the United Nations estimates 1-2% of global cropland is removed from production annually due to salinization alone.

That statistic got the attention of Naveen Sikka, Founder and CEO of TerViva, an Oakland, CA-based sustainable agriculture startup aimed at developing new crops for marginal or underutilized farmland.

“Agriculture is not simply about food, it’s about resources,” says Sikka. “It’s about food, fuel, feed, fiber, and raw material inputs, and our company’s feeling is that non-food products should be grown on land that is not sustainable for growing actual food like vegetables or wheat. We set out to figure out how to do that.”

So-called “new ag” or “ag 2.0” is a growing field in which agronomists are working to identify new crops that can meet the food and fuel demands of the future. Terviva is trying to work sustainability into this equation.

“TerViva is trying to re-establish the value of this under-productive land,” says Sikka. “A necessary approach to this is to use new crops, not your standard highly domesticated corporate crops, like corn. We are not alone in this space; others are working on it, but our approach is based on sustainability. We like to grow crops that are less-resource intensive and don’t require a re-configuration of the existing ag system. ”

Sikka enlisted the support of friend and a finance expert Sudhir Rani to help launch a new crop system based on Pongamia, a leguminous tree that produces a harvest of oil-rich seedpods similar to soybeans, but with about eight times the yield. The tree can be grown on marginal croplands and requires less water, fertilizer and chemicals than comparable crops. The oil from the seed can be used in industrial applications like biodiesel and sprays, while the protein-rich seedcake can be used in the manufacture of animal feed.

“Pongamia has been around for millennia”, says Rani. “The products have been used by farmers and villagers across India, southeast Asia and Australia for a long time. It’s another source of vegetable oil, but it has benefits as a business model and from a commercialization perspective as a sustainable source of seed stock in which growers can use their existing tree cultivation knowledge and infrastructure on existing crop land, making it really economically viable.”

Sustainable benefits of Pongamia include soil restoration; as a legume, it fixes nitrogen, and as a perennial, it stabilizes soil. Because it is a hardy crop, it has lower irrigation requirements and requires fewer chemicals than comparable crops, according to Sikka.

TerViva was established in early 2010, and is currently funded with a combination of $4 million in angel capital investment and additional funds from competitions and grants, including a National Science Foundation Grant in partnership with UC Davis and Texas A&M to research genomic molecular marker-assisted breeding techniques. TerViva currently employs 10 full-time and five part-time staff, including agriculture and plant science experts, geneticists, and economists. The company is currently raising a second round of capital to fund the next two years, and expects to reach profitability in 2015.

TerViva is currently working in Florida, focusing on land affected by citrus greening disease, which has wiped out 60%, or 500,000 acres of citrus cropland in the last ten years.

“Unfortunately, soy and corn don’t grow well in Florida,” says Sikka. “So you have growers looking for new options.”

Pongamia works especially well with Florida citrus farmers who already know how to grow trees.  The crop can be dropped in to the existing system with very minimal reconfiguration of existing agricultural infrastructure, according to Sikka.

TerViva is also working in Hawaii, where 80% of Hawaii’s sugar cane acreage was taken out of production in the nineties, due to changing markets.

“We chose these two areas because we felt the crop technology we were working on would be a great fit,” says Sikka. “We spent our first few years building up the technology platform; the genetics, propagation, genomic markers, cultivation, harvesting, processing, and commercialization. By 2012, we went out to Florida to ask growers to pay us to work with us and were successful in signing up customers, including several well-known large landowners, including U.S Sugar Corporation, citrus grower Evans Properties, and Mosaic, a public phosphate mining company. Future target areas in the United States include Texas, Arizona, and California.

The company works by selling technology access fees to growers, and sharing in harvest profits.

“We have the technology, and the growers have land, equipment, labor, expertise, and processing infrastructure,” says Sikka. “Large growers are really well suited to deploy a technology if it drops in and fits their operation. It’s like a license, but we really partner with these growers; we work with them.”

Terviva is hoping to establish the first 2000 acres in Florida and Hawaii in the next 18 months, and then continue to scale up acreage within those states while targeting additional geographies.

Down the road TerViva hopes expand on its partnerships with organizations like REG, the largest biodiesel producer in the United States, to make Pongamia a significant part of the biodiesel value chain.

Sikka sees a strong opportunity for global expansion, where Pongamia can substitute for South American soy in the growing biofuel markets of Brazil and Argentina. Sikka also believes Pongamia can compete with palm oil, a crop notorious for its sustainability challenges.

“Our mission is to restore underproductive ag land by establishing Pongamia as a pre-eminent, sustainable new crop,” says Sikka. “Based on the yields we get, we are less carbon-intensive and use less water and less fertilizers and chemicals per gallon of fuel produced.”