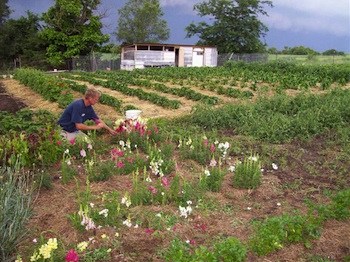 Matt Russell, one of Coyote Run Farm’s owners, grew up on a farm in Iowa. And before Russell went to college, he swore he would never do two things: Become a farmer, and live in a small community. Well, a few years out of college was all it took to change Russell’s mind. He moved back to Iowa with Patrick Standley, the Farm’s other owner, and founded the 110-acre Coyote Run Farm in Lacona, IA, in January of 2005. “I wanted to set roots in Iowa,” Russell said. “When we felt like we had enough money to buy a farm, we started looking in the fall of 2004.” The farmers found land through a real estate agent within six weeks of starting their search.

When Russell finally did decide to go into farming, he wanted to make certain his farm business model would mitigate risk. “I wanted to figure out a way to increase the net as a percentage growth. Instead of growing bigger, I wanted to have lower growth and lower input.”

Although Russell grew up on a traditional farm (his parents farmed soybeans and corn, and didn’t use sustainable practices), he wanted to embrace a sustainable farming lifestyle. “I wanted to show people they could do farming differently, and I figured if it’s possible (to farm sustainably), I should do it,” Russell said.

The farmers use crop rotation, soil erosion prevention and pasturing on the hillside to stay sustainable. “I want to make the land more productive while not being on an ‘input treadmill,’” Russell said. “The three most important things on our farm are biodiversity, holding soil and clean water.”

Over the years, Coyote Run also has become involved with a few environmentally minded farming programs:

Currently, Russell said that any revenue Coyote Run generates is rolled back into the Farm. And although the Farm isn’t conventionally profitable, its wealth is substantial on paper in asset form, which allows the farmers to borrow cash when needed. The Farm has grown over the years, though. “We had three cows and now we have 12. We’ve built ponds and the farmland is in better condition now — that’s how we view our wealth,” Russell said.

Coyote Run sells its produce at the downtown Des Moines, IA, farmers’ market. “We also do delivery to Des Moines every Wednesday and deliver produce to customers directly.” The farmers also sell to a few local restaurants.

The farm produces hay, has a wildlife refugee area, eggs (from pasture hens), beef (from a 45-year old herd of mostly angus bloodlines), grains, grass, mules, and has about an acre-and-a-half area of chemical-free, seasonal produce. Currently, the Farm’s produce is 2/3 of its gross income. “We sell a lot of heirloom tomato plants, peppers and bedding,” Russell said. “Our production has evolved over time. Heirlooms account for 1/4 of our income.” The Farm also produces greens, and garlic, as well as cold-hearty greens in the winter.

Russell said he thinks there’s a lot of opportunity for small-scale farmers. He said that when he was growing up, many people were trained to be unconscious of where their food came from. Now, consumers are more connected with where their food is grown. And while Russell is optimistic about where the small farm movement is headed, he doesn’t want new farmers to get frustrated. “(New farmers) need to understand the tax code and that most farmers make their income off farm. Having a farm (at first) is more like having a sideline small business that can be profitable. But if it were easy, than everyone would be doing it.”

Russell also said that farmers who are at different places in their lives are able to tackle different types of farms. Russell said that it’s hard for many young farmers who don’t have assets to get started. He also stressed that success in small farming comes from growing quality, diverse crops.